Elimination of the Opposition

The Prime Minister appointed by Khomeini, Mehdi Bazargan had already had a long and distinguished career. He was educated in France, and headed the first engineering department at Tehran University (1940s). He was Mossadegh's deputy PM in the 1950s, and a founder of the Freedom Movement of Iran, which worked under the Shah to promote democracy and separation of religion and state. He didn't like the ideas for the new constitution, but was not allowed to resign on this issue: however he and his cabinet all resigned over the US Embassy hostage issue in November 1979. 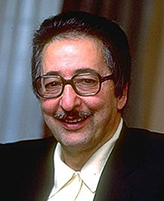 The first President was Abolhassan Banisadr. He'd been a close associate of Khomeini, and held various top positions before he was elected President in January 1980, and made acting commander-in-chief on 10 June 1981. However almost immediately he was accused of plotting against powerful clerics; he went into hiding, but was impeached by parliament on 21 June.

Khomeini's Revolutionary Guard had already seized the presidential palace. Banisadr was stripped of his powers - supportive journalists were imprisoned, and several friends were executed, All political parties except the IRP were banned - and opposition politicians were arrested. Leftists and secularists in the civil service and universities were purged. Banisadr decided resistance was futile, and returned to Paris, where, aged 86, he still lives (2019), from where he periodically denounces the Iranian regime.

Suppression of the opposition, principally led by the MKO, continued, with thousands arrested, tortured, imprisoned, killed in clashes or executed until by 1984, little was left to eliminate. The Shah's SAVAK after purges of its leaders, resurfaced as MOIS. There was no longer any significant opposition to the revolution. The was, however, opposition to Khomeini: by the end of the 80s there was a three-way split over what shape the Islamic Republic should have:

The "conservatives", led by the President Ali Khamenei wanted no state interference in trade and the economy. Their supporters were the bazaar, and conservative clergy;

The "leftists" led by Prime Minister Musavi and supported by Ayatollah Hussein Ali Montazeri. They wanted a more populist state with responsibility for welfare and regulation of the economy;

The "pragmatists" (from 1987) led by Rafsanjani - wanted technology-based efficiency and economic growth: not too worried about political freedoms. 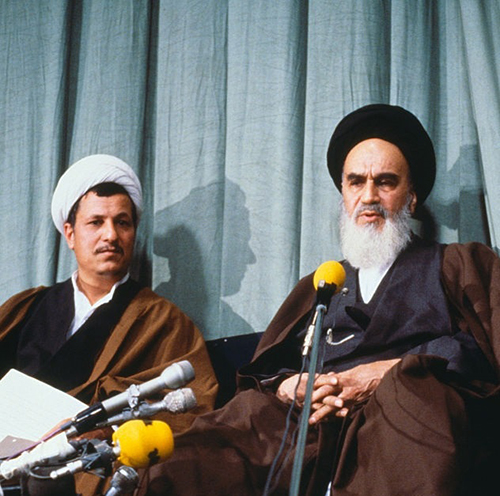 Continue here for the background to the US-Iran hostility

Saddam Hussein's Soviet-backed Ba'athist regime had two motives for attacking Iran in September 1980: fear of a Shi'a takeover was one. Iraq's people were predominantly Shi'i, and the Ba'athist ruling party were (nominally at least) Sunni. Iraq held two of the holiest Shi'a places (Najaf and Karbala) associated with the origins of Shi'ism, where influential ayatollahs were based - Saddam must have seen Iraq as a tempting prize for the larger and now aggressively Shi'i Iran. The other was the opportunity offered by an Iran distracted by the hostage crisis, in trouble with the USA, and with internal political problems with the opposition to Khomeini. It was a tempting target.

Iraq quickly occupied a large area of south-west Iran: the oil-rich province of Khuzestan, with its predominantly Arab population. Iran was caught on the hop, but once the hostage crisis was settled, and the opposition dealt with, Khomeini took charge, and went on the offensive. In May 1982, Khorramshahr (the one major city captured by Iraq) was liberated. But Khomeini was not satisfied with recovering occupied territory. He made the fatal error of invading Iraq, with the intention of taking Baghdad, and toppling Saddam. With no support from outside (the US embargo prevented updating weaponry), the IRI put itself on a war footing - all resources were diverted to the war-effort. The war intensified - both countries bombarded cities with missiles, and attacked each other's shipping in the Gulf. It soon settled into a war of attrition - both countries suffering massive damage. In the final phase of the war Saddam Hussein used poison gas against Iranian troops, and his own rebellious subjects - most notoriously at Halabja in Kurdistan (March 1988).

In 1981, President Ronald Reagan began authorising secret arms sales to Iran, using an Israeli proxy. Iran was in desperate need of arms and spare parts for the ongoing war with Iraq, and Reagan didn't want Iran to turn to Russia for help. In 1983, the Americans launched a campaign to prevent any nation selling arms to Iran.

At the same time, Khomeini whose declared goal was the overthrow of Sunni regimes in Saudi Arabia and the Gulf, sponsored the unification of various Shi'a groups in Lebanon, with the initial objective of harassing the US in the current civil war, and, from 1982, the Israeli occupation. From 1982 kidnapping began of Americans and other foreigners to use as hostages: Hezbollah (which denies it) was largely blamed for these abductions - whose purpose was to deter and retaliate against western actions - though other motives also existed.

From 1982, the covert sale of arms to Iran was made conditional on the release of hostages, which Iran was able to effect. The waters were further muddied when in 1985, the running of the scheme fell into the hands of Admiral Poindexter and his deputy, Col Oliver North. Their cunning plan was to put the price up, cut out the middle-man (Israel), selling directly to the Iranian government, and use the extra profit to fund (also illegally) the right-wing Contra rebels opposing the socialist government of the Sandinista Liberation Front in Nicaragua, Central America (who'd ruled Nicaragua since overthrowing the 40-year rule of the Somoza dynasty's kleptocracy in 1979).

Exposure came in November 1986 - leaked to a Lebanese magazine by a senior official of the Revolutionary Guard Corps. The Iranian government confirmed the story. Reagan appeared on TV to explain:

My purpose was ... to send a signal that the United States was prepared to replace the animosity between [the U.S. and Iran] with a new relationship ... At the same time we undertook this initiative, we made clear that Iran must oppose all forms of international terrorism as a condition of progress in our relationship. The most significant step which Iran could take, we indicated, would be to use its influence in Lebanon to secure the release of all hostages held there.

An enquiry was set up, to which Reagan testified. His protestations of ignorance were accepted at the time, but have since been exploded. He seemingly preferred to be thought an idiot (why didn't he know what his appointees were up to?) rather than a criminal - but in later broadcasts he admitted responsibility. Oliver North (who destroyed evidence hoping to cover up):

"Ronald Reagan knew of and approved a great deal of what went on with both the Iranian initiative and private efforts on behalf of the contras and he received regular, detailed briefings on both...I have no doubt that he was told about the use of residuals for the Contras, and that he approved it. Enthusiastically."

The Iranian whistle-blowers, who were connected to Montazeri, were executed. The USA gave up the idea of meaningful contact with Iran, and began supporting Iraq more directly.

By 1987, Iran was winning. It had more, better-trained, better-motivated troops, despite inferior weaponry. In return for attacks on Iranian shipping, the IRI managed to stop Iraq's oil exports from the Gulf. Iranian victory seemed imminent: but this was not to the liking of the US and its allies. Iraq exports were routed through Turkey; it borrowed money from Arab states to buy the latest weapons from an international community anxious to prevent an Iranian victory. This included chemical and biological weapons - the US turned a blind eye. The tankers of Kuwait (a close ally of Iraq) were re-flagged as American - if the IRI attacked them it would be attacking the US directly. By start of 1988, the US was supplying vital intelligence to Iraq. That year a US warship, USS Vincennes, shot down an Iranian airliner with a missile killing 290. Reagan's protestations that it was a mistake - and his award of a medal to its commander - did not play well in Iran. However, chemical warfare, US hostility, and Iranian isolation forced a cease-fire in August 1988.

This was the signal for the Mojahedin, the socialist/Islamist party that head fought the Shah (since 1965) and since its repression by Khomeini had been regrouping, under Masoud Rajavi; first in France, and then under Saddam's protection in Iraq. They took this opportunity to invade the IRI - who dealt with them swiftly and effectively. The was no popular uprising to greet them.

The war had killed around 1,000,000 Iranians - renewing the Shi'a sense of martyrdom, going back to Karbala and Najaf (shrines from which they were now cut off by the hostilities), themes which were constantly used to motivate the new generation of martyrs. Alongside the regular army and the Revolutionary Guards there was recruited a third force of volunteers (some just boys) - the Basij. Despite the religious divisions, neither the Shi'a in Iraq nor the Sunni Arabs in Iran turned against their own nations. After eight years and massive casualties with huge damage to infrastructure, both sides ended up exactly as they had been at the start.

In June 1989, Ruhollah Khomeini died aged 87 - he'd been in ill-health for some years. His funeral was attended by millions, amid chaotic scenes in which mourners were trampled to death and his coffin destroyed and his shroud torn to pieces by hysterical followers, eager to secure a holy relic. There had to be a second go - this time in a steel coffin. His last year was marked by brutal treatment of political prisoners, thousands of men and women were executed. In February he pronounced his fatwa against the British writer Salman Rushdie, for an alleged blasphemous passage in his novel Midnight's Children. Finally he disinherited his chosen successor, Ayatollah Montazeri, who had criticised him publicly over his executions.

He had not resolved the infighting between the various factions of the IRP.

Ministry of Intelligence and Security. It also continued to run the Shah's notorious Evin prison.

The Mojahedin-e Khalq Organisation (MKO or MEK) were accused of apostasy: they retaliated effectively against Khomeini's repression - a campaign of street violence and bombing culminating in an attack on Khomeini's HQ in which 70 of his friends and advisors were killed, including Ayatollah Beheshti. But they were outfought, and had to continue the struggle from abroad - first Paris, then Iraq.

The Kurdish Democratic Party (KDP) continued an armed rebellion in Iranian Kurdistan until 1984.

The Marxist Tudeh party was eliminated.

US policy at the time was curiously reminiscent of the Achaemenid attitude to the Peloponnesian War between Athena and Sparta which began in 431 BC: keep helping both sides in the expectation that they would exhaust each other, to the longer-term advantage of the US.

One of the objectives of the Revolution had been to export itself to the wider region. More or less its only success was the encouragement of Shi'a groups in Lebanon to come together as Hezbollah ("Party of Allah"), in 1982. As it gained in confidence, Hezbollah broke free of Iranian control.

US support for Iraq

In US support had long been growing. Donald Rumsfeld, Reagan's Special Envoy to the Middle East, had (notoriously) visited Saddam Hussein in 1983, and diplomatic relations had been resumed in 1984. Video here.

Khomeini was slow to get involved in this issue. It was only after demonstrations in the UK and Pakistan that he realised that here was an opportunity for him to publicise his claim to the leadership of Islam. For Sunnis, a fatwa is non-binding religious advice, although for Shi'as it is binding. In fact, though, Khomeini's proclamation of a death sentence on Rushdie was not properly a fatwa - which requires a guilty verdict fro a court. However, the term caught on in the west! But the effect was to alienate any remaining friends in the West, as Iran seemed increasingly to be a strange and violent place.