To show how open-minded they were, and to defuse the opposition movements, the Rafsanjani government decided to approve a much wider spectrum of candidates for the 1997 election. Never in their wildest dreams did the conservatives imagine that the conservative candidate (Ali Akbar Nateq-Nuri) would lose. Not only did he lose, he got less than a third of the 30,000,000 voters cast. The winner, by a landslide was Mohammad Khatami, the left's candidate. 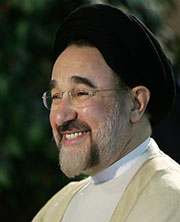 Born in 1943, he'd been a keen supporter of the 1979 revolution, although he'd served in the military under the Shah. Being an Islamic philosopher rather than a jurist he was not eligible to be an ayatollah. He'd also studied western philosophy - and run the Islamic Centre in Hamburg. He was outward-looking, a fine communicator, and shared Rafsanjani's lack of enthusiasm for the puritanical aspects of Khomeini's legacy.

Winning elections is not enough

Khatami too was surprised by his victory - and so wasn't really geared up enough to push through his programme of reform: thus he found himself outsmarted by the conservatives. Extra press freedom, which Khatami had encouraged, led to constant attacks on Rafsanjani - driving him to ally with the conservative faction. Rafsanjani accepted leadership of a new "Expediency Council" - introduced to rule on disputes between parliament and its watchdog, the Guardian Council. The conservatives prevented reformers gaining influence in the Council of Experts - and consolidated their grip on the constitution by targeted assassinations of key reform-minded figures, carried out, as Khatami discovered, by the Intelligence Ministry. This did enable him to reform the Intelligence service - so that it could in future carry out what an Intelligence Ministry is supposed to .

In 1999, Khatami oversaw local elections - held for the first time (although they were written into the constitution). The result was another landslide for Khatami's supporters. But although he could win elections, power still resided elsewhere. The conservatives used their control of the judiciary to ignore the assassinations, while shutting down newspapers, imprisoning opponents, and - most conspicuously - suppressing student demonstrations in favour of reform. 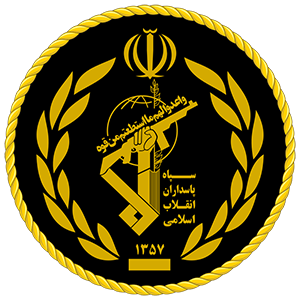 In 2000, Khatami won another resounding victory at the polls, securing a parliamentary majority for the reformers - who now controlled the executive and the legislature, two of the three branches of the state. But it wasn't enough: the conservatives, who got less than 10% of the popular vote, still controlled the unelected institutions - the Supreme Leader (rahbar), the armed forces (Khamenei as rahbar was commander-in-chief), the judiciary and the Guardian Council. In addition, they now had the Revolutionary Guards, who under Rafsanjani, had been allowed to increase their power and influence massively - now with economic muscle through investment in oil and other industries. The reformers found themselves powerless in the face of determined conservative opposition. Khatami decided it was pointless to pursue a confrontation that he would certainly lose.

Only in the social area was there any progress - censorship was relaxed, allowing political consciousness to develop through open discussion: and the people voted in huge numbers for reform. But what they got was repression: by the next election day in 2005, Khatami had virtually given up his reform programme. Lack of action by the reformers had led to apathy among its supporters. Women's rights remained as always, although the policing of hijab was considerably relaxed. The regulation black, brown or navy female "uniform" (manteau, trousers, headscarf covering all hair, closed shoes) began to evolve with colours, new styles, even fashion creeping in. His presidency had been only a respite from the dictatorship of the arch conservatives, who ensured that Khamenei's man won in 2005. The reformist agenda was to be rolled back without delay, under the presidency of Mahmoud Ahmadinejad. 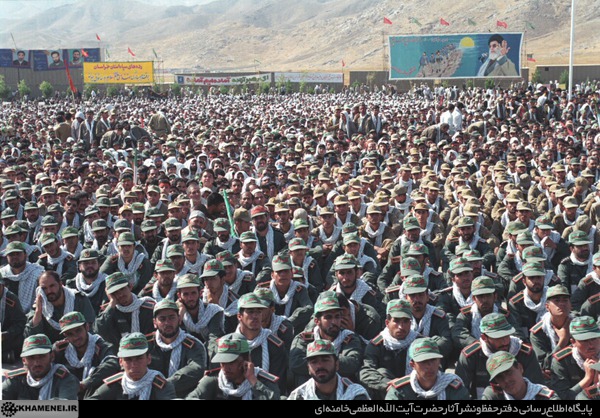 Here Khatami was more successful. Relations with Russia and China improved rapidly, while a new policy towards the West which he called "dialogue of civilisations" was approved by the UN who declared 2001 as the Year of Dialogue Among Civilizations. Diplomatic and trade relations with EU improved markedly. Only the US remained recalcitrant. In an interview to CNN Khatami (after apologising for the embassy siege - which he had not supported - and explaining how Iran's mistrust in US dated from its involvement in the 1953 coup against Mossadeq) argued that the US and Iran had much in common - both states being founded on religion, and seeing liberty and religion as complementary:

In effect he was saying that Iran saw America as a role model, in its ambition to create a democracy based on religion. But the American reactions ranged from merely negative to downright hostile.

Rapprochement was indeed becoming a possibility under Clinton's presidency - but was wrecked by conservatives in both countries. But with Republican George W Bush coming to power, and the tragedy of the attack on the World Trade Centre in 2001, relations were soon at an all time low. They deteriorated still further with Bush's "axis of evil" speech in 2002. By the end of Khatami's second term in 2005, Iran looked more isolated than ever. The US, using Iran's nascent nuclear industry as a pretext, became ever more hostile.

By 1997 "left" meant moderately reformist supporter of the Islamic revolution. Khatami was supported by many of the generation who as students had occupied the US embassy in1979. They were followers of Khomeini, who had supported the war with Iraq. Khatami's victory was achieved by his style rather than any radical policies. He called it "Islamic democracy" - and reached out to women and young people, promoting civil liberty, the rule of law, and normalising of foreign relations.

Khatami won 80% of the 70% turnout. His victory, however, only consolidated the determination of the conservatives (who controlled everything except the presidency) to hobble him

Established soon after 1979 by Khomeini to safeguard the achievements of the revolution. He had forbidden them to interfere in politics. But the war with Iraq transformed them into a battle-tested fighting force. Rafsanjani used them to help in post-war reconstruction - hence their involvement in business and making money for themselves. They began thereafter to flex their political muscle - on behalf of the conservatives.