Hasan Fereydoun was born in 1948. Like his predecessor, he came from a humble but religious family., which also changed its name His shopkeeper father was arrested many times for anti-Shah activism. His education from ages of 12 - 21 was entirely religious, the most part at Qom Seminary. While a student he was active in support for Khomeini, and arrested for speaking out against the Shah. He later studied Law at Tehran University before his compulsory 2-year military service. 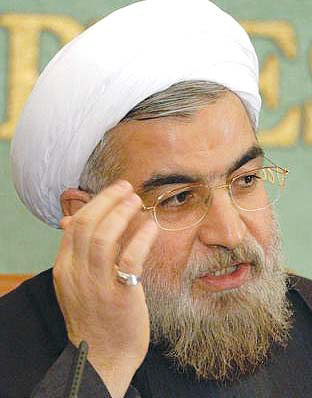 After 20 years working for the revolution, in 1980 he was elected to the Majlis, where he spent five terms and another 20 years involved mainly in defence and foreign policy. He was very much an insider of the regime, a team player, and chosen as one of the Council of Experts. He was also an academic: In 1995 he took time out to earn an MPhil and then a PhD for work on Islamic Law at Glasgow Caledonian University, UK. When he was standing for election as President in 2013 and 2017 was accused (inconclusively) of plagiarism in his doctoral thesis. He held several strategic posts during the Iran-Iraq war in the 80s, and was named for involvement in the Iran-Contra affair. After the war he became The Supreme Leader's representative on the newly-created Supreme National Security Council, and was security advisor to Presidents Rafsanjani and Khatami. In this capacity he advised on the student protests in 1999: "At dusk yesterday we received a decisive revolutionary order to crush mercilessly and monumentally any move of these opportunist elements wherever it may occur. From today our people shall witness how in the arena our law enforcement force . . . shall deal with these opportunists and riotous elements, if they simply dare to show their faces."

After years of corruption and deteriorating foreign relations under Ahmadinejad, people, tired of hardline policies, were hopeful that the new president - a "moderate" by Iranian standards - would solve the problems highlighted and exacerbated by his predecessor. Though opposed by a hardline favourite, he won by a landslide, backed by those who'd supported the Green Movement in 2009, and by religious traditionalists who disapproved of the policies of the Supreme Leader, and by former presidents Rafsanjani and Khatami. There was dancing and the streets, and the Iran football team qualified for the World Cup of 2014! The mood was upbeat. His promise was of "saving the country’s economy, reviving ethics and establishing constructive interaction with the world".

He immediately (within three days of inauguration) opened a dialogue with the west, which would lead ultimately to the to the Joint Comprehensive Plan of Action (JCPOA aka "The Iran Nuclear Deal") in 2015 whereby restrictions on Iran's economic life were lifted in return for cutting back on nuclear ambitions. Rouhani was re-elected in 2017 with a second landslide, despite vigorous opposition from the conservative Ebrahim Raisi, destined to be his successor in 2021. For President Obama it was the crowning achievement of his presidency: for President Trump it was "the worst deal ever", and he proceeded to withdraw from it unilaterally (2018) - to the consternation of the other signatories - and impose ever more draconian sanctions. Oil income boomed immediately, and then in 2018 crashed.

Rouhani tried to save the economy with tax rises and privatisation of state-owned companies, but could not prevent its near-collapse, as foreign companies which had rushed to invest after the Nuclear Deal now rushed to get clear lest they invite US punishment. Iranians with cash fled the devalued rial as they hurried to acquire eros and dollars. Inflation sank to an almost-unheard-of rate, under 7%, in the wake of the Deal, as Rohani's popularity soared, but afterwards rose to unprecedented levels - made worse, since 2019, by the Covid-19 pandemic, which hit Iran particularly badly. Rouhani's popularity also crashed - by the time of the 2021 election he was seen as the most unpopular President in the IRI's history.

Rouhani was in favour of universal access, but unable to prevent censorship and restriction by the religious leadership. But nevertheless, the Internet became a valuable for voicing and organising dissent. Masih Alinejad, who founded the My Stealthy Freedom page on Facebook has millions of followers

Another area over which Rouhani had little control. He professed belief in equal opportunities for women, and appointed several women to his cabinet, and as ambassadors. Despite continued repression several successful protest movements were inspired by acts of courage by individual women. In 2014 came "My Stealthy Freedom" where women were encouraged to post pictures of themselves hijab-free; in 2017 came Girls of Revolution Street, inspired by Vida Movahed publicly and prominently removing her hijab (Video here). Since then there has been White Wednesdays and My Camera Is My Weapon. Many women have been arrested and imprisoned as a result of these protests. In 2018, Rouhani publicised the result of a survey made in 2014 which show over 50% of the population would be happy to see the end of enforced Islamic dress. But the conservatives struck back. A law passed in 2020 cunningly uses traffic cameras to catch women driving without hijab - if convicted their cars are confiscated.

Executions - only China kills more of its citizens - continued as before.

Unlike his predecessor, Rouhani wanted Iran to have better relations with other nations, but was hamstrung by the attitudes of the conservative principlists. An interview with Foreign Minister Javad Zarif revealed that Rouhani was not always in the loop during negotiations: he knew nothing, for example, of Iran's commitment to military support of al-Assad regime in Syria until informed by US Senator John Kerry. If the 2015 Nuclear Deal was a triumph, it's cancellation by President Trump was a total disaster for Rouhani, which massively strengthened the hand of conservatives who had never wanted a deal. Even his cautious approach to establishing rapport with President Obama was met with demonstrations of disapproval.

Any hope of progress was dashed by the assassination in 2020, on US President Trump's order, of General Qasem Soleimani leader of the al-Quds (Jerusalem) Force in the Revolutionary Guards - seen as Khamenei's right-hand man. Iran retaliated with largely symbolic missile attacks on US bases in Iraq. As head of extra-territorial and clandestine military operations he had orchestrated the Iranian assistance to President Bashir al-Assad during the war in Syria, and was a key figure in Iran's ambition to control the Shi'a Crescent, from Iran, through Iraq to Syria and Lebanon. His funeral in Baghdad became a massive anti-American demonstration; and vast numbers - a "sea of humanity" - attended when ceremonies took place in cities across Iran.

Iran during these years continued its policy of consolidating Iranian influence in the Shi'a Crescent through its proxies in Syria, Lebanon, Yemen - challenging the Sunni power of Saudi Arabia wherever the situation allowed.

As well as the well-supported Facebook protests [above], there were several occasions on which public anger was forced to express itself, despite the precedent brutal repression of the 2009 outpouring of rage at the rigged 2009 election: the Supreme Leader had warned of "bloodshed and chaos" awaiting those who persisted demonstrating. He was true to his word. Protesters were beaten, shot, tortured, imprisoned - and made to "confess" in TV show trials.

The end of 2017, start of 2018 saw thousands protest in cities across Iran against the rising cost of living, involving attacks on infrastructure, and calls of "Death to Khamenei!". The state responded with shows of military force, with casualties, and mass arrests. Despite verbal backing from President Trump, the protests did not, as in 2009, threaten revolutionary change. In the decade since 2009 society has evolved - and Iranian culture has begun to crumble under the pressures of consumerism, social media, female education and the weakening of the "traditional" religion-based patriarchy of the countryside - the countryside itself changed through drought and advancing desertification. Rouhani responded not with repression, like Ahmadinejad, but by showing his sympathy for the protesters - promising more personal freedom, and a more accountable government. Rouhani accepted that change is inevitable - while working to ensure that there could be no actual attempt to overthrow the regime:

“The problem is that we want people two generations younger than us to live the same way we like to live, while in reality we can’t…prescribe their lifestyle.”

There is opposition, but it is as yet incoherent and disorganised. They want an end to theocracy. They want a better standard of living. They don't want the monarchy back. They don't want socialism. When the Supreme Leader, now [2021] an infirm 82 dies, there will be change. To ensure that change will be minimal, the new President taking office this year will be the hardliners' hardliner, Ebrahim Raisi - who may also have his eye on Khamenei's job. 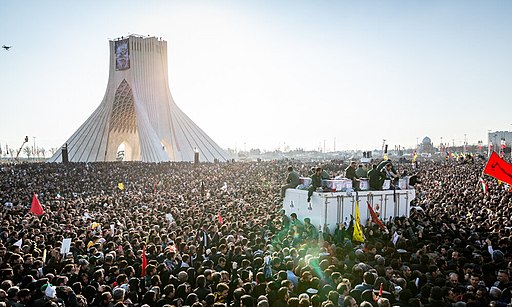 The Shah had been offered help by the US "Atoms for Peace" programme as far back as 1957. Research began in 1967, aided by the US. The Shah proposed to build 23 nuclear power stations by 2000. He had signed signed the Non-Proliferation Treaty renouncing military use of atomic weaponry in 1968. Khomeini was hostile to nuclear power post 1979, but when the existence of secret nuclear facilities was revealed in 2002, the world began to show concern that the Revolution had ambition to create a nuclear weapon. Inspections by the IAEA showed that the world was right to be worried. Iran halted its nuclear weapons programme in 2003, in response to international pressure, but continued to build its first nuclear power plant, with Russian help, which was opened in 2011, despite sanctions by the US and others imposed from 2006. At great cost to the Iranian economy, the nuclear programme continued.

Signatories of the JPOAC were:

The proxy war in Yemen between the Iran-backed Houthis and the Saudi- backed government has cost thousands of lives, and introduced famine and disease to the poorest country in the Middle East. It is sadly reminiscent of a similar clash in Yemen in the 6th century AD between the Sasanian-backed Jewish Himyarites and the Byzantine-backed Christians of Aksum.