Iran: the Safavids - Tahmasp I

Ismail's eldest son was only 10 when he became Shah - and ruled for 52 years. After a decade of chaos when civil war raged among various tribes of the Qizilbash, allowing Uzbeks to the east and Ottomans to the west to threaten his rule, Tahmasp began to impose his authority. By 1537, when he was 23, he had seen off five Uzbek invasions, and dealt with the obstreperous Qizilbash - and the Ottomans. 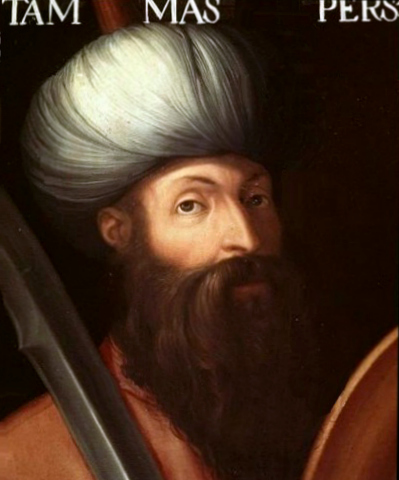 The Ottoman sultan - none other than the greatest of them, Süleyman I ("The Magnificent" ruled 1520 -1566) was intent on expanding and consolidating his European empire (he reached Vienna in 1528) and feared a hostile enemy to his rear. He launched three attacks on the Safavids, but Tahmasp kept him at bay with considerable success - only Baghdad and Mesopotamia were permanently lost (in 1534). His capital at Tabriz had proved vulnerable to the Turks - he moved it eastwards as far as Qazvin, emphasising the continued Iranicisation of the Safavid realm. It's to his credit that his father's achievement was still more or less intact by the time of his death. And the old "oil and water" divisions between Turk and Iranian were beginning to break down, slowly - as the shah himself gradually lost his religious status. He made several efforts to annex Georgia - waging jihad against a Christian country. He failed to conquer it, but imported tens of thousands of Georgian and Circassian prisoners as slaves. From them came women for his harem (mothers of future rulers), and a loyal army of converts (ghulams) to counterbalance the unreliable Qizilbash (rather as the Mamluks had ben used, with such success).

Tahmasp wrote his own account of his reign, in Persian, not Turkish - showing what he wanted posterity to think about him. His father Ismail, he said, was neither Mahdi nor God. They were both devotee of Ali - and strict observers of sharia (God's law), dedicated to preparing the way for the return of the 12th Imam. Rather like Darius and the Achaemenids with Ahura Mazda 2000 years earlier, he believed in divinely-assisted kingship: the Safavids had been chosen by God to bring order, justice and security to the world. Although (or because) he'd been brought up in the hedonistic Timurid court in Herat, he became a strict ascetic in later life, condemning wine, women, gambling, beard-shaving, homosexuality - and figurative art. As a boy he'd enjoyed painting - with a particular skill at miniature portraits. In 1556 he signed an "Edicts of Sincere Repentance" - aimed partly at the Qizilbash rituals which involved much dancing, drinking and music. He believed strongly in dreams as a mechanism whereby God passed on messages to his chosen ones. He disassociated himself from the more macho aspects of his father's personality and way of life: his hunting (Tahmasp preferred fishing!), his drinking, his feasting. In later years he lived as a Sufi - abstaining from all pleasure.

Chaos ensued after Tahmasp's death. Of his three sons in contention, supported by different Qizilbash factions, Khudabanda was virtually blind and thus overlooked, Haidar was soon murdered, leaving Ismail - although his father had kept him imprisoned for the past 20 years - with good reason, it seems. His short reign was spent murdering his brothers and other male relatives in full Ottoman style, and trying to bring back Sunnism. He died in suspicious circumstances before he could eliminate Khudabanda, though - who survived together with four of his sons.

Khudabanda was Ismail I's eldest son, who had escaped Ismail II's purge. His brother's death was a signal for the eruption of bloody chaos and civil war once more between the Qizilbash factions. The new shah was weak and incompetent. Into the vacuum stepped two powerful women and their rival supporters - Ismail II's sister, Princess Pari Khan Khanum, and Khudabanda's wife, Queen Mahd-i Ulya. The Princess soon lost out, and was murdered, but the Queen insisted on reigning in her own right, until after a year in power, a Qizilbash conspiracy led to her murder too (1579). From now on, the Qizilbash were effectively in charge - and lost no time in persecuting their Iranian colleagues. Once again vicious internal upheaval led to external enemy attacks from the Uzbeks and the Ottomans. The Ottomans had suffered a severe defeat at the Battle of Lepanto in 1571, but under Sultan Murad III, still had energy to invade Safavid territory, and make gains in Transcaucasia and Kurdistan, and capture Tabriz (1585).

Meanwhile, Khorasan had become a major trouble spot. There had been Uzbek attacks - and under its young governor, Khudabanda's son Abbas (appointed by his father at the age of seven), supervised by his Qizilbash mentor Ali Quli Khan, it had become virtually an independent state. In 1581, Ali Quli proclaimed Abbas the new shah. Ali Quli's revolt was suppressed - but soon young Abbas was snatched by another Qizilbash amir, Murshid Quli Khan, governor of Mashhad. Murshid Quli with Abbas now rode into Qasvin, and forced Khudabanda to abdicate - something he showed no reluctance to do. Abbas was crowned shah in October 1587. His Qizilbash "protector" doubtless assumed that the real power would be his. He was very wrong.

NEXT: SHAH ABBAS I

Imam Reza, the Shi'i Imam - from whom the Safavid family (allegedly) descended, whose tomb was in Mashhad. He wasn't dead, though, only hidden. He would return as the Mahdi to usher in the end of the world and the final triumph of Islam.

The so-called Shahnameh of Tahmasp, one of the most beautiful manuscripts of Firdowsi's epic, was commissioned by his father Ismail I. Years of painstaking work were involved in the lavishly illustrated work, and it was probably completed during Tahmasps's reign - though as he was only 11 when he succeeded, he is unlikely to have contributed much to the project. Ismail may have intended it as a gift for the Ottoman sultan, Süleyman the Magnificent. It was given with great pomp and ceremony to Selim II in 1568. After the fall of the Ottomans it came into the possession of the Rothschild family, from whom it was acquired by Arthur Houghton II. Houghton split the volume up to avoid taxes - some he kept, some he gave to the Met, others he sold to museums and collectors around the world. A single page was sold for 7.4 million pounds ($12million) in 2011.

According to his memoirs, he threw half his food and drink away, didn't ride a horse for 20 years, and could spend a whole day clipping his nails! He wanted his family, his subjects, and the whole Muslim community - even the Ottomans - to embrace peace and divine order (i.e. the hierarchy of God - Ali - Shah - subject).

There was a tradition that whoever became the new Sultan would have his brothers killed. The caused a problem with the death of Murad III. He'd had 103 children - 47 survived him. 20 were boys: Mehmed III finally succeeded, and had his 19 brothers strangled. After this the custom began to wane, and an equally unsatisfactory method was adopted: keep the sons in the harem where they could be supervised and do no harm. But such an upbringing was no preparation for government. Sadly, this became Safavid practice, too, from the time of Abbas I.

The greatest naval battle since antiquity (400 ships), and the last one to involve only oared ships. The Holy League of Catholic powers (including Spain, Portugal, Venice, Genoa and other states) was commanded by the Hapsburg Don John of Austria. It was a great symbolic victory which halted Ottoman expansion into Europe, from which Philip II of Spain acquired great prestige (which he lost in 1588 after the defeat of the Spanish Armada by England).