Almost 100 years ago, an English archaeologist began investigating a vast ancient city in the blisteringly hot desert of eastern Iran, a few miles from the border with Afghanistan, on the Helmand river. Excavation started again in the 1960s. The city was burned down three times, hence its modern name. Finds to date include:

There's a massive cemetery containing maybe 20,000 graves. Only about 100 have been studied so far. Finds from the cemetery: 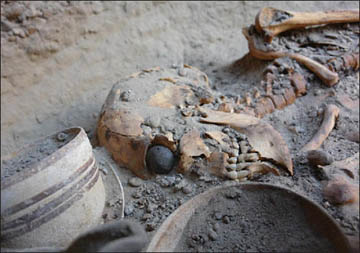 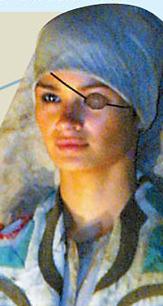 1. A skeleton of a tall woman (6 ft) aged 25 -30, wearing the world's earliest artificial eye (the world's first prosthesis of any kind in fact). It's about the size of half a ping-pong ball, made of something very light, probably bitumen paste. It's covered with a thin layer of gold, engraved with a central circle (representing the iris) On each side of the eye minute holes have been drilled, so it could be held in place by a gold thread. And in fact her eye socket shows clear imprints of the golden thread. So she must have worn it while she was alive - somewhere between 2900 and 2800 BC.?

2. A skull which shows evidence of brain surgery.

3. Worn teeth. Men and women of all ages damaged their teeth in using them as a tool in weaving items such as carpets, baskets and other household items.?

4. A swelling on the bones of his lower leg on a man in his 40s shows he rode a large animal all his life - he'd have been a camel courier.

5. Women. Study of the graves shows that women lived longer than men in the Burnt City. The city's men died on average between the ages of 35 and 45, while some women lived well into their 80s.?Women, not surprisingly, outnumbered men in a population of perhaps 6,000. The presence of important-looking seals in women's graves makes us ask if they had a special status.

The oldest known backgammon set - it ?is made of 60 pieces from turquoise and agate, and has a rectangular ebony board.?

The oldest known dice to go with it. 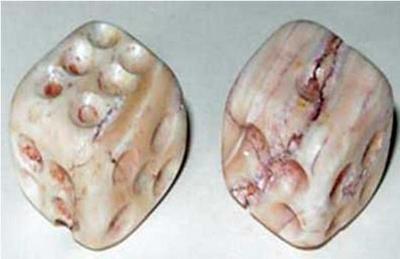 The first ever animation ...

On a painted cup a goat (an ibex in fact) jumps up to nibble a bush. There's actually a series of 5 little pictures, which someone has put together cunningly. There's nothing else like it in ancient art.

Fishing nets and hooks suggest that fishing (in the Helmand river) was one means of livelihood for the inhabitants of the ancient city - this is also evident in the recurrent use of fish patterns on the earthenware found at the site. The ibex - a common motif - was presumably hunted locally and eaten.

Goldsmiths could cut sheets of gold less than a millimeter thick. Very fine jewellery was created.

Pottery includes simple bowls, drinking cups and water bottles, much of it painted.

Fragments of woven fabrics have been found - some dyed, some plain.

The first ever staircases have been found in houses in the Burnt City.

The Burnt City inhabitants buried dishes, cups and other needs for living with their dead, indicating a belief in some kind of life after death. Some were buried with garlic - presumably to scare off evil spirits.

No weapons have been found, and the city had no walls. But we don't know its name, who its inhabitants were or what caused it to be abandoned.

NEXT: ANOTHER MYSTERIOUS CULTURE

Another very ancient and very mysterious civilisation in Iran. Their degree of sophistication 4- 5,000 years ago is amazing - and, as study continues, may they well turn out to have been in advance of anything in Egypt or Mesopotamia at this date.

Is there any connection with Jiroft - or even the Elamites? We don't know. 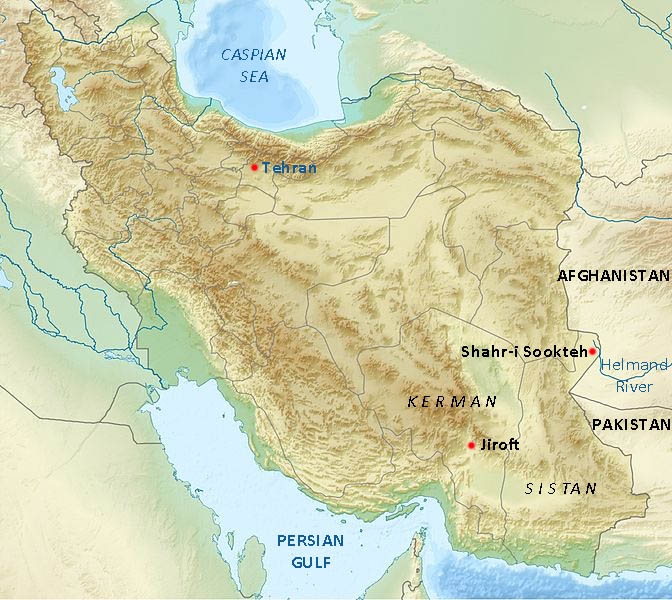 Shahr-i Sookteh, the 'Burnt City' on the border with Afghanistan