Iranian people of Central Asia beyond the Oxus: the Sogdians

King Darius proclaims: This is the kingdom I control, from the Saca who are beyond Sogdiana, from there as far as Kush, from the Indus as far as Sardis, which Ahura Mazda, greatest of the gods, gave me.

For Darius, Sogdia marks the remote northern frontier of his empire - as India marks the east, Kush (Nubia - Sudan) the south and Sardis the west. But looked at on the map it's far from remote, linking as it does the plains of Central Asia to China, India and the west. The Sogdians were by far the most important of China's trading partners.

Archaeological evidence shows that Maracanda, later Samarkand, the chief city of the Sogdians, was already occupied in the 1300s BC. The Zoroastrian religion originated among the Iranians of the northeast - the Sogdians and their neighbours in Bactria and Khorasan (Chorasmia). It was one of the last areas of the Iranian world to accept Islam after the Arab conquests.

Darius names Sogdia as one of his satrapies whenever they are listed, - but we don't know how or when it became part of his empire; presumably it was one of Cyrus' unrecorded conquests. This north-western frontier was crucial for the Persians: time and again throughout their history they had to deal with invaders from this quarter - Cyrus himself died fighting them. Sogdia was their buffer.

Alexander, already master of the Iranian plateau, was pursuing the defeated king of kings, Darius III: he couldn't afford to let him become a focus of resistance in the east. But a group of Persian satraps got Darius first - intending to hand him over to Alexander to bring the war to an end. However, their leader, Bessus, satrap of Bactria, had another plan: he killed Darius and proclaimed himself his successor as Artaxerxes V. Alexander, who thought of himself as Darius' successor had to take up the challenge. He chased Bessus further and further east - eventually crossing the Hindu Kush, the desert beyond and the river Oxus. He was now in Sogdia, in Transoxiana. The terrain and climate were hostile - as were the local tribesmen. Alexander was in no mood for compromise: there were brutal reprisals, and thousands of Sogdian villagers were killed or captured.

Bessus' followers now were in a panic - they arrested him and handed him over to Alexander, who had him mutilated and brutally executed. But their leader, Spitamenes, fought on, supported by nomad horse-riding archers from the desert - and inflicted severe damage on Alexander's army.

Next spring, Alexander returned to Sogdia. He needed to crush these rebels so he could move on into India. After crossing the Oxus again he came across a well from which gushed out

[a liquid] just like olive oil in smell, taste and brightness, although the countryside was not suitable for olive trees

Alexander continued to his base at Samarkand (Maracanda) - but there, in a drunken quarrel, he murdered Cleitus, the leader of his elite Macedonian cavalry unit, the Companions, and one of his father's oldest friends. Most probably Cleitus had objected violently to being appointed satrap of Sogdia:

...not only untamed but untamable. I'm sent among wild beasts... [Curtius]

Spitamenes was soon, like Bessus, to be murdered by his friends.

The remaining rebels tried to hold out on two isolated rocky outcrops - and taunted Alexander, suggesting his men would need to grow wings to get at them. Alexander chose a small group of experienced climbers, and offered them unheard-of rewards to scale the first rock (the "Sogdian Rock"). When the Sogdians saw them on the top, they surrendered.

Their leader, Oxyartes, now a prisoner, persuaded the defenders of the second rock to surrender too. His daughters had been captured with him - one of them, Roxane, was said to be the most beautiful woman in Asia. Alexander married her - a symbolic gesture to show that his war against the Persian empire was over. But it's quite possible that he was actually in love with her.

Alexander's successors linked Sogdia with Bactria to form a single satrapy, settled by more Macedonian and Greek veterans than anywhere else in his empire. Some of the colonies Alexander founded or developed are still important cities: Balkh (Bactra), Herat (Alexandria in Aria), Kandahar (Alexandropolis in Arachosia), Bagram (Alexandria of the Caucasus), and Khujand ("The furthest Alexandria"). Soon this wealthy territory declared itself independent from the Seleucid empire to the west - from which it was cut off by the Parthians - under Diodotus I around 250 BC, though it's not at all certain how much the Greco-Bactrians were in control beyond the Oxus.

Diodotus, the governor of the thousand cities of Bactria, rebelled and proclaimed himself king. [Justin]

But after a century or so, the Greco-Bactrian kingdom began to break up, as a result of rival claims on the throne and nomad invasions - first by the Saca and then by the Yuezhi (see the page on Ai Khanum). South of the Hindu Kush it survived for another century, before it was overwhelmed by the growing Kushan empire.

Hardly anything is known about Transoxiana from the time of Diodotus. But from the 2nd century BC, it's clear that its central position between China and Iran was helping the Sogdians to develop into key players on the Silk Road.

The 5th to 8th centuries

"The Sogdians excel in commerce and love gain; once a man reaches the age of twenty, he goes off to the neighbouring realms; wherever there are profits to be made, they go."

Sogdia was frequently conquered and reconquered by Huns, Kidarites, Hephthalites and Turks - sometimes in alliance with the Sasanians. The Sogdian people however continued to prosper, and expand their territory - winning a reputation as entrepreneurs along the silk route. Sogdians made up the largest foreign community in China. Early in their rule (AD 751) the Arab Abbasids halted Chinese advance at the Battle of Talas river in the far northwest - and, supposedly, the secret of paper manufacture came to the west from Chinese prisoners. 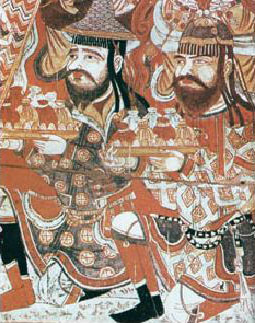 A comprehensive survey of everything Sogdian is here: https://sogdians.si.edu/the-rediscovery-of-the-sogdians/

Sogdia was a satrapy of the Achaemenids (mentioned on the Bisitun inscription of Darius I). The Sogdians were an Iranian people, speaking a language similar to Persian, and following the Zoroastrian religion. They were conquered (with difficulty) by Alexander, who fell in love with and married Roxane, the daughter of the satrap. It became part of the independent Greek kingdom of Bactria, until it succumbed to the Saca and Yuezhi invasions. But gradually its wealth and importance recovered: the Sogdians became the essential middle-men of the Silk Road between China and India and the Sasanian and Byzantine empires. 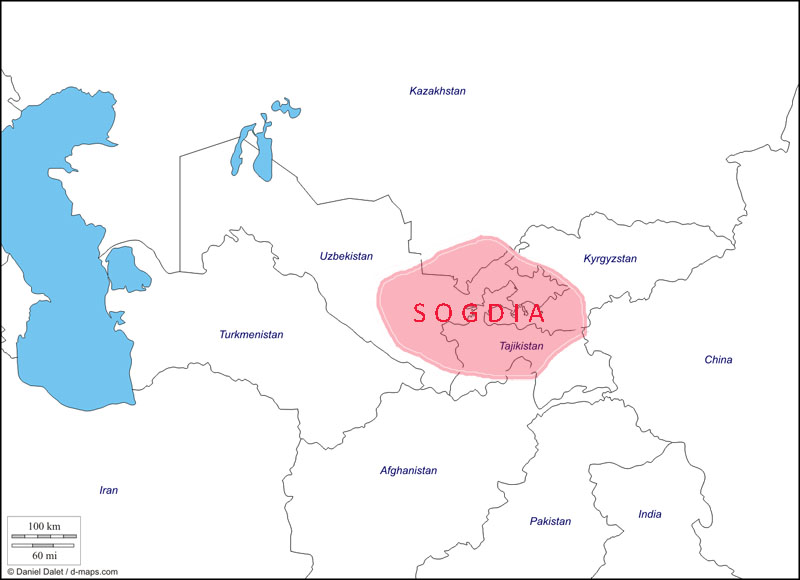 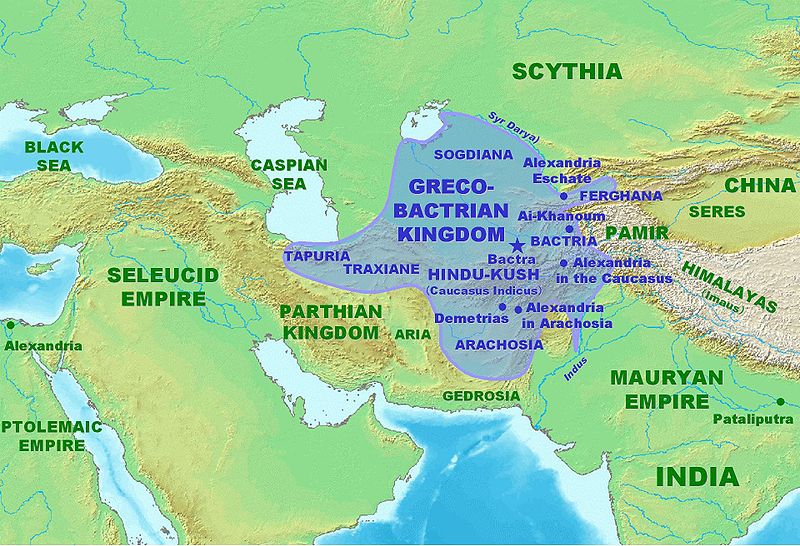 Bactria and Sogdia under the Greek dynasty around AD 180

None of their dates are certain. Those given are possible years of accession.

The first ever mention of the Middle East's petroleum resources.

Now the second city of Uzbekistan. It has a colourful past, having been fought over by the Sasanians, Huns, Turks and Chinese before being taken by the Arabs around AD 710. It was home to Zoroastrians, Manichaeans, Buddhists, Jews, Christians before adopting Islam. Later (around AD 1370) it became the capital of the Mongol empire of Timur.

A very ancient city, founded according to myth by Kayumars, and associated with the origins of Zoroastrianism. It was the capital of Bactria. Later it was an important Buddhist centre. It resisted the Arabs strenuously, until AD 715.

Site of the notorious US airbase and prison in Afghanistan. It remained as the Greco-Bactrian capital after western Bactria was lost to the Yuezhi (140 BC). It was later the capital of the Kushan empire. Works of art from Greece, Rome, China and India have been found there - showing what an important centre of international trade it became. Its Greek name refers to the Hindu Cush mountains - which were known as "the Indian Caucasus".

On the site of Cyropolis, founded by Cyrus the Great just before his disastrous encounter with the Massagetae. Until recently it was Leninabad; it's the second city of Tajikistan.