Syria was the Greeks' name for the for the lands between the Euphrates and the Mediterranean, between the Taurus mountains in the north and Arabia in the south. There had been a thriving kingdom, connected with the Hittite empire to the north, in the late bronze age based in Ugarit (near Latakia) which was destroyed around 1200 BC, presumably by the "Sea Peoples". In 539 BC, when it fell to Cyrus, its inhabitants were mainly Semitic Aramaeans, speaking the Aramaic language, which had over several hundred years become the lingua franca of the Assyrians and Babylonians to the east - who had dominated them politically for centuries. There were minority populations of Jews, Arabs and Armenians: there was already considerable Greek influence. 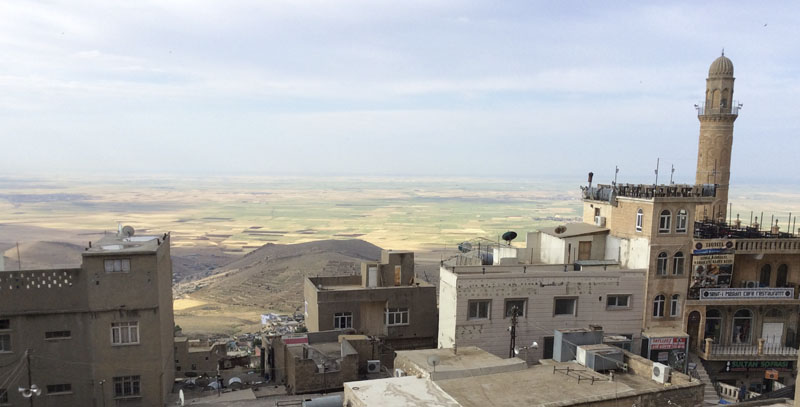 Looking into Syria from Mardin in the mountains of southern Turkey. Photo AMW

It's generally assumed that Syria and Phoenicia passed into Persian control after Cyrus' capture of Babylon in 539 BC. At any rate the Phoenician fleet was available to help Cambyses' conquest of Egypt in 525 BC. It was not a separate satrapy - it was governed as part of "Babylonia and Eber-Nari" (Babylonia and the "lands across the river" - ie west of the Euphrates). Eber-Nari also included Cyprus, Phoenicia and Yehud (Judaea) among its sub-districts. Later (before 450 BC) Eber-Nari did become a satrapy on its own. Little more is heard of Achaemenid Syria until the Macedonian invasion of Alexander.

Damascus, probably the capital of the satrapy, had been used by Darius III as a store for Persian royal treasure and other resources. Its satrap however enthusiastically betrayed it all to Alexander's general Parmenion. A later Greek writer has some fascinating details:

As Parmenion tells us in his Letter to Alexander, which he sent to him after the capture of Damascus, when he had taken possession of all Darius' property; having counted all the items which he had taken, he writes as follows:

“I found three hundred and twenty-nine concubines of the king, all skilled in music; and forty-six garland-weavers, two hundred and seventy-seven cooks, twenty-nine boilers of pots, thirteen cooks who prepare dairy dishes, seventeen who prepare drinks, seventy who look after the wine, and forty perfumiers.”

Tyre in Phoenicia held out strongly for seven months, and was treated brutally after it was taken. Gaza, too, held out - despite the example of what happened to Tyre. Alexander's route to Egypt was then clear - it fell with little resistance.

After Alexander's death, Syria became the heartland of Seleucus I's empire, with a new capital founded at Antioch (now Antakya). This was "Antioch on the Orontes" - Seleucus founded a large number of Antiochs across his domains - named in honour of his son, Antiochus. Antioch became in time one of the great cities of the world of the eastern Mediterranean - rivalling Alexandria and Constantinople. Over the following two centuries, as Seleucid control weakened - nibbled away by the Parthians to the east and Romans to the west, the once mighty empire found itself reduced to little more than the immediate surroundings of Antioch. Even that came to an end when Pompey reorganised the remnants: from 63 BC it became the Roman province of Syria, with Antioch, rather then Alexandria increasingly taking over as the major city of the east. It became a focus for eastern Christianity.

From its first mention in the 1st century BC, Emesa appears as a client kingdom and loyal ally of Rome. Prosperity came along with increasing closeness to the Romans - culminating in the marriage of the emperor Septimius Severus into a leading Emesan family: two emperors (Alexander Severus and Elagabalus) were thus half Arab. The city of Heliopolis (Baalbek) was in Emesan territory.

Ther's a full section on the short-lived flowering of Palmyra under Queen Zenobia here. 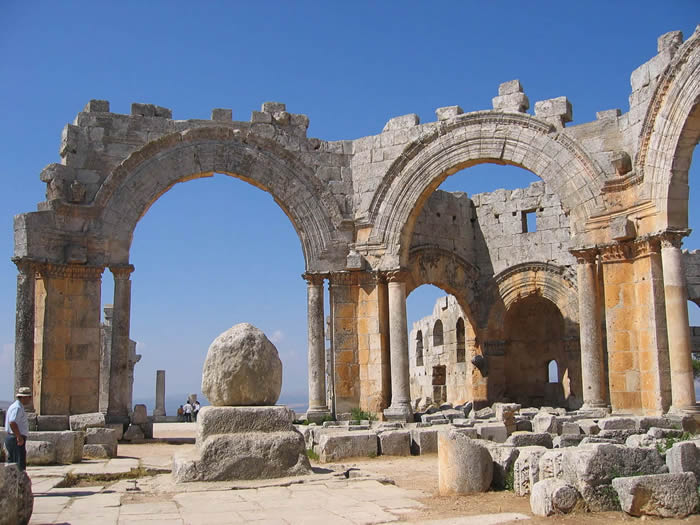 The remains of the church near Aleppo in Syria built round the pillar where St Simeon the Stylite lived for 47 years. The base of his pillar now has the large boulder on top of it. Photo Wikimedia.

The Parthians seem not to have been ambitious to acquire territory west of the Euphrates, despite the Roman hysteria about the "Parthian threat". The Sasanians were seldom confident enough about their porous eastern and northern frontiers to do more in the west than try to ensure that the Romans remained on their own side of the Euphrates. However, during the reign of Justinian, in AD 538, Khusrau I saw the opportunity for a preemptive strike on Syria - he sacked Antioch and deported its population (maybe 300,000 people) to Mesopotamia. But there was no attempt to occupy Syria permanently. Not until the reign of Khusrau II in AD 614, did the Sasanians retake the ancient Achaemenid territory in Syria and the Levant -and this was a result of Byzantine weakness rather than Sasanian ambition. In any case, the status quo was very soon restored by the emperor Heraclius, who however, saw his work undone by the Arabs who took Syria from Byzantium in AD 637.

For the Arab conquerors it became al-Sham (the north) - and Dimasq (Damascus) remained the Ummayad capital until the Abbasids moved the centre of the Arab empire to the east, to Kufa, then Baghdad in Iraq. Despite Islamic rule, various forms of Christianity continued to flourish in Syria: only after the Ottomans took over from the Mamluks in 1516 did Syria become predominantly Muslim. The modern republic evolved after WW1 from a French mandated territory, becoming fully independent in 1945.

A prize conquest by the Achaemenids; the heartland of the Seleucids; forcefully defended by the Romans against Parthians and Sasanians who seemed in fact rather uninterested in extending their power west of the Euphrates. 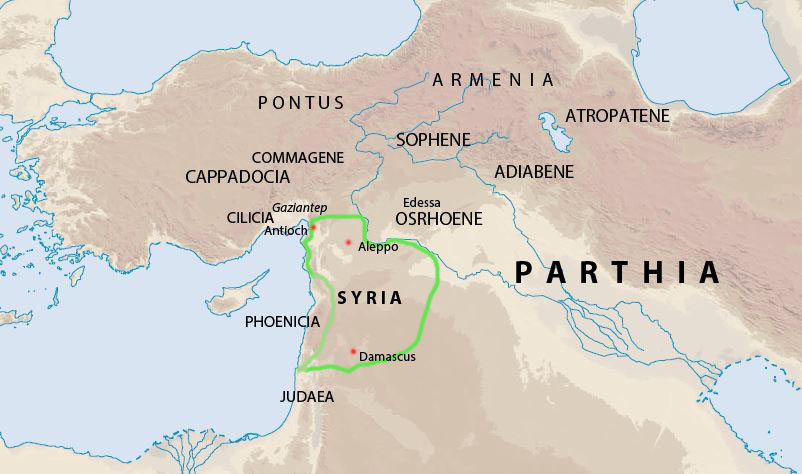 Was the ancient Akkadian name for this territory , which gets frequent mentions in the biblical Ezra and Nehemiah.

was Athenaeus, who lived in the 2nd century AD. He wrote imaginary letters between famous individuals - but this one may be real (the numbers seem very precise).

The Greek word is only found here. I think it may refer to cooks skilled at making khoresh, the classic Persian stews made with meat and vegetables or fruit.

The Greek word for those who look after the wine is also unique to this passage: it literally means wine-strainers, or wine-filterers. The sophistication of Darius' court is amazing.

Antiochene Christians emphasised the two natures of Christ (God and Man) and originated the Dyophysite branch of eastern Christianity (today represented only by the Church of the East). The Alexandrians emphasised the union of the two natures, and hence are called Miaphysites (such as today's Coptic and Syrian Orthodox churches). Antioch's approach was based on reason, history and Aristotle, while Alexandria's was mystical, allegorical and looked to Plato.

Syria was also the location where St Simeon lived on top of a pillar for 47 years to prove his holiness.