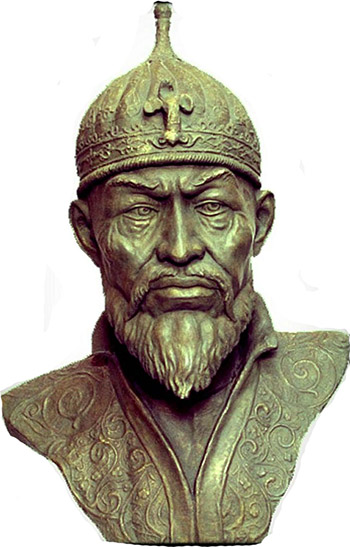 Otherwise known by his Persian name Timur, or Timur-e Lang (Timur the Lame) - or in European literature as Tamburlaine (in Marlowe's Tamburlaine the Great), or Tamerlane. He was from a minor Turco-Mongolian clan in Transoxiana, part of the Chagatai Khanate. Chagatai's portion had by this time split into an eastern half (Mughulistan, eastern Turkestan, still little changed from the pagan, nomadic period of Mongol supremacy, and Transoxiana, the more sophisticated western half, Muslim, Turkicised, settled, with the rebuilt urban centres of Samarkand and Bukhara). The western sector, like the Ilkhanate, was fragmented into fiefdoms of warring amirs. Since around 1346, they'd been known as the Qara'unas - and formed a distinctive nation; although they still owed nominal allegiance to a descendant of Chagatai and Genghis. Temür ("Iron") was born, traditionally, in 1336. His followers later claimed he was descended from Genghis and also Ali, the prophet's son-in-law, but his family was an obscure one: he sought to improve his status by marrying two princesses from the family of Genghis.

But like Genghis, on whom he explicitly modelled himself, he rose to power through a band of loyal friends to leadership of his tribe, which in turn attracted support from other small tribes. He made alliances and broke them as convenient, but, by 1370, had overcome the Qara'una amirs (including Husain, who had befriended him and who'd been a loyal ally in his rise to power), and emerged as the strong man of Transoxiana - ready to defend his people against threats from the east (Mughulistan) and west (The Golden Horde). Unlike Genghis, he had no plan for world-domination - but to keep control of his huge following he needed to keep them busy and happy. His solution was to embark on a 35-year programme of invasion, conquest and mayhem. He would offer them action - and booty. After 1370, He hardly ever returned to his homeland, and kept firm control of his armies personally - no potential rivals were permitted.

Apart from making Samarkand into a showpiece city with architecture more wonderful than anything built by any predecessor in Central Asia (an ambition in which he succeeded - thanks to captured artists and craftsman), his programme was one of invasion, terror, demonstrations of power, plunder and withdrawal. He frequently returned to the scene of a crime (e.g. in Iran) to plunder and destroy it once again. His aggression affected Iran, Northern India, Syria, Khwarazm, Mughulistan, Azerbaijan, Afghanistan: he had to do some serious defending, though, against the Golden Horde - he fought off Toqtamish six times between 1385 and 1395. Some "highlights":

Shiraz: From Isfahan, Timur proceeded to Shiraz, from where the Muzaffarid ruler, Shah Shuja, fled. The city sensibly surrendered without a fight and Timur held court. The conqueror then ordered the deportation of the most skilled Shirazi artisans, who would embellish his capital of Samarkand. After an interlude in which he fought the Golden Horde, he returned to Shiraz in 1392, where a Muzaffarid named Mansur had re-established the dynasty. There was a battle which Mansur lost. Timur entered Shiraz triumphantly, where “the good red Shiraz wine was presented in golden cups by the prettiest girls in the city.” He received the submission of other Muzaffarid princes, who he later killed. Artists and scholars from Fars were deported to Samarkand. The poet Hafez was a resident of Shiraz, and allegedly had an exchange of poetic banter with Timur.

Delhi (1397): killed 100,000 prisoners: "The Timurids wielded their glistening swords and poured the Indians' blood into their goblets like wine."

Damascus (1401): Syria was still Mamluk territory. Though he spared the life of Ibn Khaldun , the Arab traveller and historian (who wrote about their meeting), he massacred the population, looted the city and set it on fire, destroying the 8th century Umayyad mosque. "An abominable deed"

Baghdad (1401): refused to pay tribute. 90,000 massacred and Eid al-Adha celebrated with human sacrifice. Each soldier had to bring two skulls - from which 120 towers were built.

Ottomans (1402). Timur defeated the Ottoman Sultan Bayezid I, near Ankara in 1402, and kept him in an iron cage, like a bird, until he died (quite soon). He was helped by the Aq Qoyunlu - whom he rewarded.

Georgia (1403). Timur devastated Georgia seven times, massacring the population and destroying churches - but was the only enemy he failed to conquer..

China (1405). Timur set out on his most ambitious expedition - against China, now under the rule of the native Ming dynasty since the ousting of the Yuan dynasty of Mongols in 1368 - but died at the border. 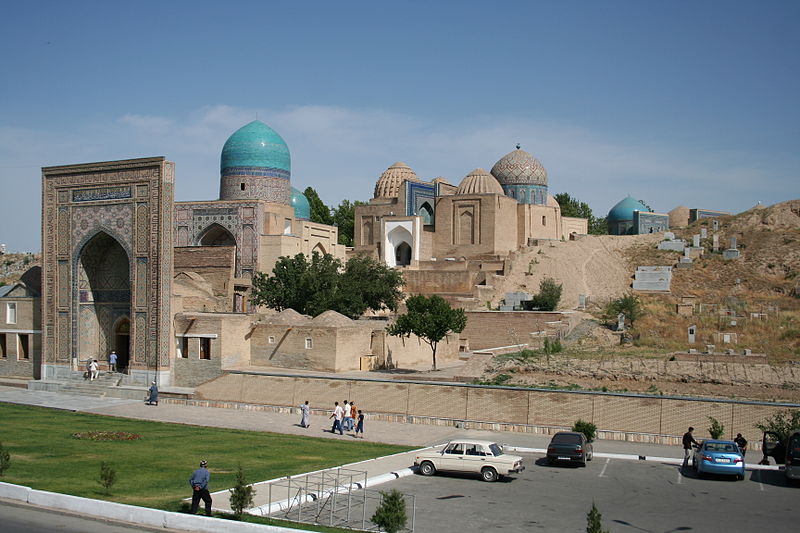 Timur was an exceptionally brilliant and successful military leader - undefeated in battle throughout his long career. He set a standard, though, for ruthlessness and brutality which was not equalled (or perhaps surpassed) until the 20th and 21st centuries - when more efficient means of killing had been perfected. But when he died, his "empire" began to fragment immediately. He was a Muslim, but his conquests were not motivated by religion - it's even unclear whether he favoured Sunni or Shi'i. But undoubtedly he was "one of the most complex, puzzling and unattractive figures in the history of Persia and Central Asia." [David Morgan, Medieval Persia, 1988] 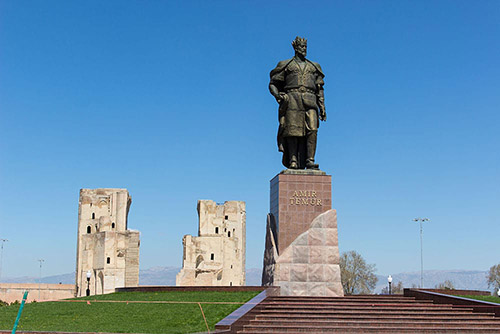 Temur, the Uzbek national hero! He was in fact born in Shahrisabz, Uzbekistan, but no Uzbek.

NEXT: TIMUR'S SUCCESSORS - THE EMPIRE SPLITS

He was seriously injured in an early battle, hence this nickname - injuries confirmed when his skeleton was examined in 1941. 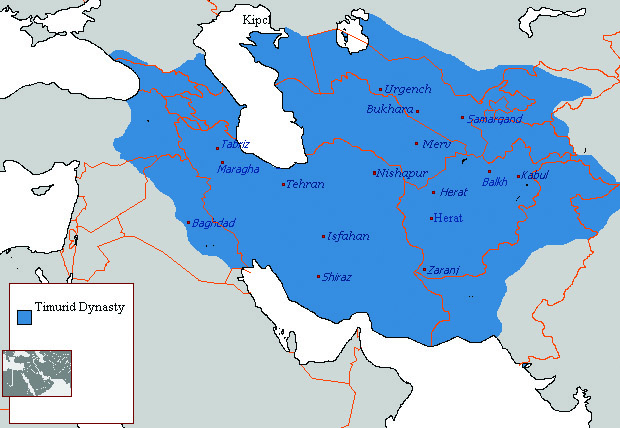 The Ottoman Turks had been expanding their influence for a century. Timur's victory was a setback - and undoubtedly gave the Byzantine empire and Constantinople, which Beyazid had been besieging since 1394, a 50-year extension of life (until 1453). Timur did not try to reach the Ottoman lands in Europe, and so they kept a base from which to retake Anatolia.

An 18-year-old Bavarian, Johann Schiltberger, who'd been with the Crusaders defeated by Bayezid in 1396, was captured again by Timur. He had incredible experiences in service with Timur and then his son, and then with the Golden Horde in Siberia. He eventually escaped and made his way home via Constantinople in 1426 to write his memoirs!