Iranshahr after Timur: Timurids and Türkmen

After the death of Timur, the Iranian world soon divided into two mutually hostile sectors. For the next century or so, the eastern part was in the hands of Timur's sons and descendants - who constantly quarrelled and fought one another. The western part - including Iraq and eastern Turkey - fell under the influence of two previously obscure Turkish peoples, known as the Aq Qoyunlu ("White Sheep") and Qara Qoyunlu ("Black Sheep"). The Black Sheep were dominant at first, but the White Sheep eventually prevailed.

Timur had failed to establish any administrative system to control his conquests. Unsurprisingly all soon began to fall apart - he had not wanted his sons to succeed him and had nominated a grandson. But Shah Rukh, his only surviving son, played a waiting game, until, after four years' fighting each other, the rest of the contestants had all come to grief. He entered Samarkand unopposed, set up his son to rule in Transoxiana, and returned in triumph to Herat (now in western Afghanistan), which he made his capital (1409). 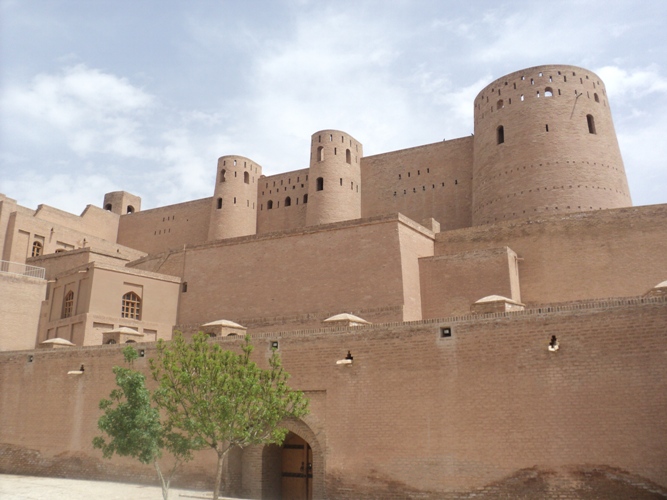 The Citadel of Herat. Original by Alexander, destroyed by Timur and rebuilt by Shah Rukh

Thankfully Shah Rukh lacked the ambitions of his father. He ruled with an eye to maintaining what he had - and keeping the peace. The Türkmen of the Qara Qoyunlu had occupied Armenia and Azerbaijan: he was unable to dislodge them militarily, but managed to induce them to become vassals, by installing their leader's brother Jahan Shah and rival as ruler (1436). He made an alliance with the Aq Qoyunlu. He'd already secured the northern and eastern frontiers. He reestablished good relations with China (now under the Ming dynasty). He died at Rayy in 1447.

Fratricidal chaos broke out once again - only this time no one was strong enough to take overall control. His son Ulugh Beg - though a great astronomer and mathematician - lost ground to the Qara Qoyunlu, and to marauding Uzbeks from the north. His successors were no more successful - an Aq Qoyunlu victory over Ulugh Beg's cousin, Abu Said Mirza in 1469 accelerated the disintegration of the Timurid territories. Later members of the family had to be content with just keeping control of their shrinking domains, while Uzbeks increasingly threatened from the north, taking Transoxiana, and invading Khorasan. The Timurids had held on, rather than dominated. Their enemies were comparatively weak - and on the death of the last Timurid in 1506, there was no obvious power to replace them. Eventually an obscure and extreme religious sect from Azerbaijan, possibly of Kurdish origin, produced a leader - who by 1510, originally supported by the Aq Qoyunlu Turkmen, had filled the vacuum. Enter Shah Ismail, leader of the Safavids.

PS A great-grandson of Timur, Zahid ud-Din Muhammad, known as Babur ("The Tiger") tried and failed to hold on to his family's territories in Transoxiana, but was successful in establishing power in northern India - he became founder of the Moghul (Mughal) Dynasty (1526) - which at its height ruled most of the Indian subcontinent, with 150 million subjects (a quarter of the world's population). It was eventually weakened by newer forces, but remained in existence until its final elimination by the British in 1858. 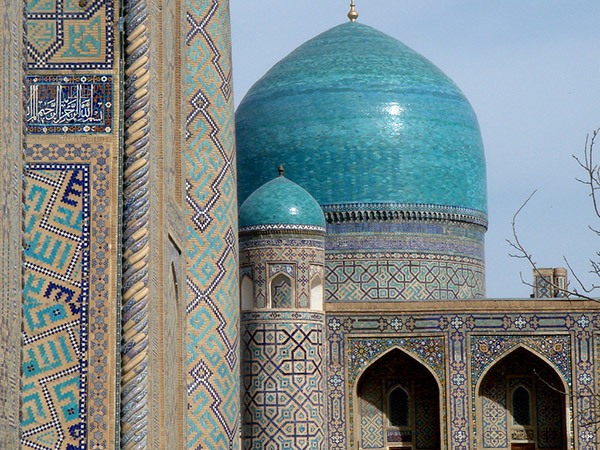 The Timurids built on Timur's exploitation of artists and architects he acquired through his conquests. Under the Timurids, these artists were allowed to disperse - and thus the splendours of Samarkand became possible elsewhere. The Timurids lacked the ruthlessness of the founder, and were keen to distract from it by demonstrating their devotion to the sophistication of Persian/Islamic culture. The result was a golden age of building mosques and other religious structures - of which many examples still survive. They also encouraged calligraphy and the production of illuminated manuscripts. Indian and Chinese influences are felt.

Two Turkmen tribal confederations of nomadic origin can be seen as the eastern counterparts of the Ottomans, who were beginning their westward expansion. Unlike the Ottomans, however, their period of domination was cut short, although the subsequent rule of the Safavids was in some respects a continuation - involving the consolidation of a thoroughly Persianised way of life by peoples of Turkic origin. The growing influence of Shi'ism was also a feature of this era.

Where they came from is unknown - but by 1410 their leader Qara Yusuf, despite earlier setbacks in confrontation with Timur, had eliminated the Mongol Jalayirid dynasty and made himself ruler of much of eastern Anatolia, Iraq, Mesopotamia and Azerbaijan. His base was near Lake Van. Yusuf died in 1437 and the leadership passed to his brother Jahan Shah, already a vassal of the Timurid Shah Rukh. Jahan Shah repudiated the Timurid link, and after the death of Shah Rukh expanded his rule and created an empire which added most of Iran to his brother's domains. He moved the capital eastwards to Tabriz, where he rivalled the Timurids in architectural ambition: the Blue Mosque was his masterpiece. He was also a keen patron of literature; his religious views are unclear - he seems to have had an interest in Shi'ism, without being "the zealot depicted by many writers". During his reign, the rival Aq Qoyunlu (White Sheep) had been consolidating under Uzun Hasan. Jahan Shah decided to challenge him, but was defeated and killed (1467) - he had not taken the threat seriously enough. The rule of the Qara Qoyunlu was finished - the Aq Qoyunlu took over. 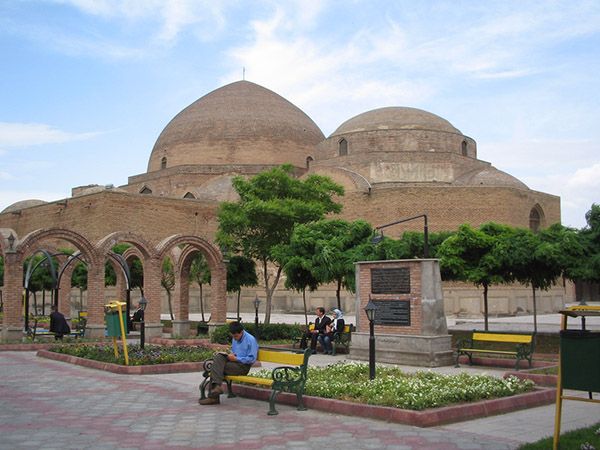 The Blue Mosque, Tabriz, built on the oprder of Jahan Shah of the Qara Qoyunlu, but added to by Uzun Hasan of the Aq Qoyonlu. It was never finished, and was ruined by earthquakes between the 16th and 18th centuries. It was finally rescued and rebuilt in the 20th century.

Their origins are equally obscure, though they were based further west than the Qara Qoyunlu, around Amid (Diyarbakir). They were weaker than their rivals, and constantly weakened further by internal disputes. They submitted to Timur, which, gained them some advantages. Uzun Hasan ("Tall Hasan") became ruler in Amid 1452 - gradually he overcame his competitors, defeating Jahan Shah decisively in 1467. The then dominant Timurid, Abu Said Mirza, tried to crush him in 1469 - but failed, and was killed. Uzun Hasan was now unchallenged, but had no ambition to annex Timurid territory in Khorasan and Transoxiana. He was happy with western Iran and Iraq. Any ambitions further west, however, were stopped by the Ottomans, who defeated him in 1473 (Battle of Bashkent). Once again the Euphrates became the western boundary for Iran-based powers. A year earlier, an embassy from Venice had arrived in Tabriz to try and create an anti-Ottoman alliance with Uzun Hasan - he had hoped to get his own supply of firearms from the Venetians, who were currently raiding the southern coast of Anatolia.

When Uzun Hasan died in 1478, his empire - created and maintained by a large and efficient army, particularly strong in cavalry, though without firearms - embraced all of Iranshahr east of the Euphrates, plus Georgia and Shirvan, as far as the great desert which demarcated the Timurid lands. After his death, his son Yacub seemed to be holding it together. Trouble was brewing though in an unexpected quarter. In 1488, he defeated his cousin (and brother-in-law) Shaikh Haidar - a leader of the Sufi Safavid community in Ardabil, which Uzun Hasan had favoured. Yacub had feared where his ambitions would take him - so he initiated a pre-emptive strike, where his young cousin was defeated and killed. Yacub died suddenly in 1490 - and in the chaos which followed, the Aq Qoyunlu dynasty, and Turkmen rule in Iran, was ended. Responsible was Ismail, the (very) young son of Shaikh Haidar (born 1487). His older brother had supported the claims of Rustam, until he was killed. Sundry other grandsons of Uzun Hasan briefly competed for the succession - but by 1501 it was all over as Ismail entered Tabriz. The young (14-year-old) god-king had arrived. The last Turkmen stronghold (Mardin) fell in 1506. The Safavid era had begun.

NEXT: WHO WERE THE SAFAVIDS?

A pleasing story is told that Timur was a keen chess player, and was in the middle of a game when his son's birth was announced. As he'd just castled, he decided to call him "Rukh" - Persian for castle (hence "rook").

Another story: Shah Rukh sent the emperor a horse as a gift. When the horse threw its imperial rider, the Chinese emperor wanted to execute the Mongols who'd delivered the present. When he was reminded that Mongols normally reacted quite badly to the execution of ambassadors he stayed his hand!

was Husain Bayqara. He ruled in Herat from 1470 - 1506, consolidating his power in Afghanistan, and ignoring the rest of the former Timurid empire, which gradually fell to the Uzbeks. He was the most successful patron of art and culture among the Timurids - enabling artistic traditions to be passed on into the Safavid era.

Most probably the two confederations were made from sections of the Oghuz people who had been moving westward. The fall of the Seljuqs of Rum to the Mongols had created a space for them to occupy.

The fall of Constantinople to Sultan Mehmed II of the Ottomans a year later (1453) and the extinction of the Roman/ Byzantine Empire was of great importance to Europe - and European historians - but barely registered in the east. To Uzun Hasan, the surviving offshoot in Trebizond, though, was more significant - he like several of his predecessors married into the House of the Comneni. Though he failed to save Trebizond from the Ottomans when Mehmed II attacked in 1461.

Founder of the Aq-Quyonlu dynasty. He married Theodora, daughter of John of Trebizond, the very last Byzantine ruler, conquered by Ottoman Mehmet II in 1461, and subsequently beheaded, because of Ottoman fears of his secret support for Uzun Hasan. Thus the first Safavid shah, Ismail I, had Byzantine ancestry, as his father Haidar married Uzun Hasan's Christian daughter, Halima.

Mehmed II's use of firearms and gunpowder proved decisive.