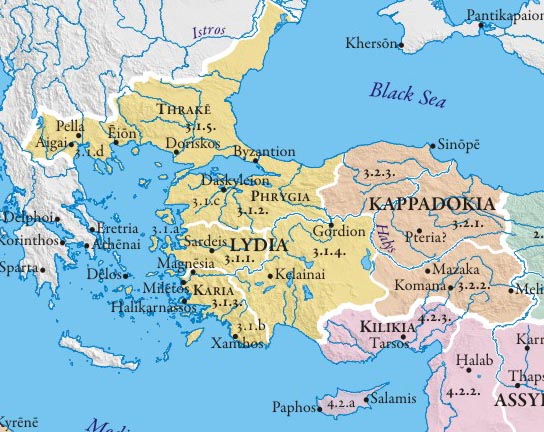 The Anatolian satrapies in 490 BC.

Conquest by Cyrus I and Darius I

In 490 BC, Darius I controlled all of Anatolia west of the river Halys (the Lydian empire, which Cyrus had won from Croesus in 547 BC) and had annexed territory on the European side of the Hellespont. The satrapy of Lydia (all the yellow on the map) included the following subdivisions:

Ionia won its independence (although it soon fell under the rule of Athens) after the Greek wars (479 BC), until it was returned to Persian control under the peace settlement of 386/7 BC. Skudra had three regions: Thrace; the "Saka" (Scythians) - peoples along the western Black Sea coast. They were both won by Darius I (around 512 BC). And Macedonia ("Ionians with broad-brimmed hats") which was conquered by Xerxes' general Mardonius during the invasion of 480 BC, and lost after the Battle of Plataea in 479 BC. After the Macedonian conquest of Alexander, Lydia lost its Iranian connection, and became increasingly part of the Greek, Roman and Byzantine sphere. Response to Greek influence may have begun earlier: perhaps because of Artaxerxes I's introduction of the cult of Anahita, breaking with earlier Achaemenid tradition that recognised only Ahura Mazda. Images of her are indistingishable from those of Artemis. Reminders of Persian rule in western Anatolia are few:

Looted from a wooden tomb-chamber at Tatarli , near the royal residence at Kelainai, there survive two painted cedarwood beams - each sawn in half in recent times, and since identification in the Archeologische Staatssammlung in Munich, returned to Turkey. They are the largest examples of painting on wood from the ancient Mediterranean. The beams have been dated by dendrochronology to around 480 BC, and are proven to have come from Tatarli. The subject matter suggests an Achaemenid source for the paintings (a battle scene and a procession) - but details point to their being pehaps local renditions of earlier paintings. The battle scene may have actually originated in a depiction of Darius I's victory over the Scythians (the "enemy" - under vicious arrow attack - certainly correspond to other Achaemenid images of Scythians), but the Persian leader's profile eye shows the painting could not have been contemporary with Darius. Battle scenes are rare in Achaemenid art - Persepolis shows only processions of subjects - there's no triumphalist "smiting" of foes as in the Assyrian tradition.

Reconstructions (by Ingrid Dinkel) of the paintings on wooden beams from Tatarli, now in Istanbul. Top: Persian archers defeat Scythians. Below: Two chariots accompanied by riders and attendants.

Its capital Sardis, captured by Cyrus from Croesus, was where the Royal Road from the Persian heartlands met the Mediterranean. In Lydia there were still temples of Anahita; Pausanias (a Greek traveller in the 2nd century AD) refers to fire-worship. Persian-syle hunting parks (paradeisoi) may have survived as attractions for visitors.

Iranian names are found in later inscriptions, indicating that the Iranian population did not just disappear.

But all in all the Achaemenids have left very little to show for their two centuries of rule in western Asia Minor.

Despite 200 years of rule, the Achaemenids left few reminders of their presence west of the river Halys (which Cyrus had crossed to invade Croesus' kingdom in 547 BC).