From the Greek point of view their defeat of Xerxes was obviously a massive event. The only evidence from the Persian side suggests that for them life went on much as before. There was no disruption to the building programme at Persepolis, and the administration continued normally. And Xerxes remained king for another 14 years.

King Xerxes proclaims: Darius had other sons also, but … Darius my father made me the greatest after himself. When my father went to his allotted place [died.], by the favour of Ahura Mazda I became king in his place.

Herodotus describes a dispute over who should succeed Darius: Xerxes was in fact the younger son. But he was Cyrus' grandson, and that probably swung it. Although Darius had been planning an attack on Greece, Xerxes' first problem was to deal with trouble in Egypt. Undoubtedly Egypt was much more important than Greece from the Persian viewpoint.

At first, Xerxes was not keen to make war on Greece, but wanted to gather his army against Egypt.

Xerxes was committed to continuing Darius' policy of securing the north west frontier of his empire. Probably that's all that needs to be said about why he invaded Greece; but Herodotus wants to make it a more interesting story.

His ambitious and persuasive cousin, Mardonius, as imagined by Herodotus, was saying things like:

"Master, it is not right that the Athenians who have done so much damage to the Persians should get away with not paying for what they did … Send an army against Athens; you will win great respect and people will think twice about attacking your territory in future."

He said this to encourage revenge, but he added:

"Europe is a very beautiful region, where all kinds of trees are cultivated - you are the only king in the world worthy to receive such a prize!"

Mardonius had other things to persuade his cousin: he had the eager promise of help from the kings of Thessaly; and the Pisistratids (who had ruled Athens until they were thrown out when democracy was established) had actually come all the way to Susa to offer support (in the hopes they would get their power back, of course).

Xerxes was convinced (in a dream, after nearly being persuaded to call the whole thing off by his uncle Artabanus). As soon as he had "enforced a more oppressive slavery upon Egypt that had been enforced by Darius" [Herodotus], he gathered his satraps together, and excited them with a speech [invented by Herodotus] which concluded:

"If we crush them [the Athenians] and their neighbours who live in the land of Pelops the Phrygian, we shall have a Persian territory whose frontier is the same as Zeus' sky. The sun will not see any territory outside our own, but I, with you, shall make all lands one territory, extending it over all of Europe."

While the satraps started collecting troops from their own areas, to assemble at a central point in Cappadocia, special preparations were made to make sure the vast army could cross from Asia to Europe and the fleet which was needed to supply it could keep close.

Darius had made a temporary bridge of boats to cross the Bosporus when he was trying to conquer the Scythians. Xerxes used the same technology - two massive ropes across the mile-wide strait at the Hellespont filled in with boats with a roadway laid across them. Something like this, maybe: 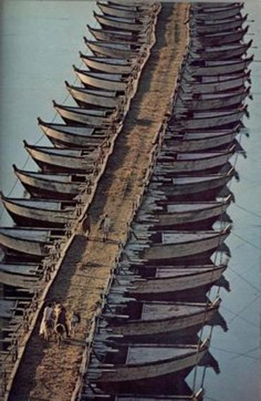 When the bridge was wrecked in a storm, Herodotus gets another chance to show how mad Xerxes is:

When Xerxes heard, he was enraged, and ordered the Hellespont to be whipped, receiving 300 lashes, and a pair of shackles to be thrown into the sea. He instructed those doing the beating to shout barbarian insults: "O bitter water, your master gives you this punishment, because you hurt him having suffered no hurt yourself. King Xerxes will cross over you whether you like it or not." … He ordered the sea to receive this punishment, and those who'd been in charge of bridging the Hellespont to be beheaded.

A second major engineering feat was the building of a ship canal through the promontory of Mount Athos: this would have been to ensure that fleet and army stayed close. But Herodotus can't resist another dig:

As far as I can make out, Xerxes ordered it to be dug because of sheer ostentation, wanting to show off his power, and leave a memorial. They could easily have dragged their ships across, but Xerxes insisted on a canal wide enough for two warships to sail abreast. 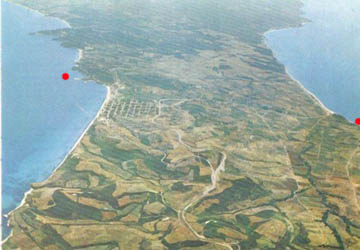 Xerxes' canal - the dark line of vegetation between the red dots shows the route (more at www.livius.org)

Xerxes joined his army at Sardis, and the move to cross from Asia into Europe began. He paused at Troy, according to Herodotus, to sacrifice 1000 cattle to Athena. Herodotus is keen to stress the Greek point of view: the Trojan War was the first great clash between east and west.

Most of the Greek cities had already surrendered (given earth and water) when invited to do so by the Persians. Athens and Sparta, though, were not even asked - as Xerxes was already at war with them. But even those who'd surrendered were dreading the arrival of the Persian army.

The crossing of the Hellespont took a month, according to Herodotus; the huge force needed to be whipped to keep them moving - unless this is Herodotus being malicious.

NEXT - THE FIRST BLOOD

Xerxes deals with a revolt in Egypt and then, encouraged by his cousin Mardonius, makes plans to attack Greece. He recruits an enormous army, bridges the Hellespont, and cuts a canal through Mount Athos. 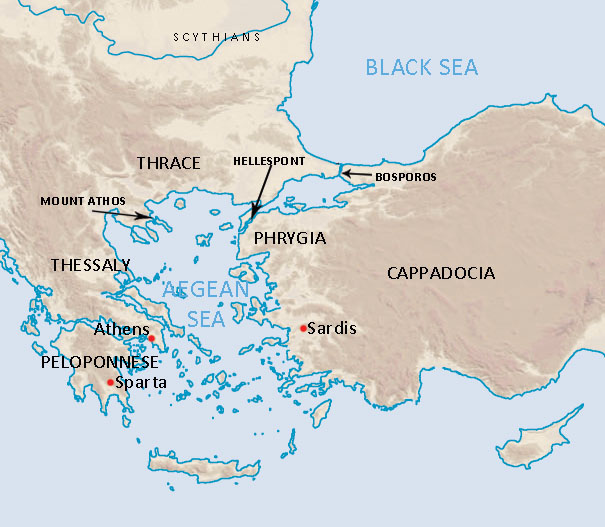 This one of several pages dealing with the reign of Xerxes.

All comes from archaeology - at Susa and Persepolis, and administrative documents. The Greek business was after all one year's campaign in a remote corner of the empire - and Xerxes did go on ruling for another 14 years.

Was comparatively new - since 508 BC. Athens had previously been under the control of one family - the Pisistratids. The surviving son of the tyrant Pisistratus, thrown out of Athens, had helped plan the Persian attack in 490 BC, hoping to get reinstated when they won. The poorest citizens did not yet have a say - nor of course did women, slaves or non-citizens.

The land of Pelops

The southern part of Greece, known as the Peloponnese - the island of Pelops (actually a peninsula, not an island). Pelops was a character in Greek myth who had originally come from Phrygia - that's in north west Anatolia, now Persian territory. Xerxes seems therefore to be suggesting he has a right to the lands of Greece. This dream of world conquest is Herodotus building up the idea of Xerxes' insanity. There will be more. Who in later history had an empire "on which the sun never sets"?

Even if it was only - according to modern guesses - between 250,000 and 500,000, supplying such a force would be a massive problem. Herodotus has the army "drinking whole rivers dry" as they advance through northern Greece.

Herodotus describes how it was built - he was obviously fascinated. It was a mighty engineering achievement, whatever Xerxes' motives may have been.

"A line was drawn across the isthmus and the ground divided into sections for the men of the various nationalities to work on. When the trench reached a certain depth, the labourers at the bottom carried on with the digging and passed the soil up to others above them, who stood on ladders and passed in on to another lot, still higher up, until it reached the men at the top, who carried it away and dumped it.

Most of the men engaged in the work made the cutting the same width at the top as it was intended to be at the bottom, with the inevitable result that the sides kept falling in, and so doubled their labour. Indeed they all made this mistake except the Phoenicians, who in this - as in all practical matters - gave a signal example of their skill. They, in the section allotted to them, took out a trench double the width prescribed for the actual finished canal, and by digging at a slope gradually contracted it as they got further down, until at the bottom their section was the same width as the rest."

"Once it was believed that Athos was sailed through, and many things that lying Greeks put down as history."

But archaeology proves it was built - as you can see from the aerial photo opposite.