Consequences of the war for Persia and Greece

For Persia and for Greece

We don't of course know how Xerxes reacted to his failure to annex Greece to the Persian empire (or even if that's what he was intending to do). Dio Chrysostom, a philosopher who wrote during the 1st century AD, and who knew Persia, said that

It was announced in Persia that Xerxes defeated the Greeks, took Athens and sold into slavery all those people who had not fled and, after this success, imposed tribute on the Greeks and returned to Asia.

It makes sense that Xerxes would have played down the defeat. And - we have no information otherwise - he could well have issued this sort of propaganda. It would have been important not to spread alarm - and after all, the setback in Greece didn't have any relevance to the existing empire. Dio Chrysostom says that Xerxes needed to "prevent restlessness among the peoples up-country". Building work continued on the royal capital at Persepolis:

...and Xerxes ruled for another 14 years. This inscription, of which copies have been found at Persepolis and at Pasargadae, was put up later than the Greek adventure:

By the favour of Ahura Mazda these are the countries outside Persia of which I was king. I ruled them. They paid me tribute. What I told them to do, they did. [a list of 29 peoples follows, including Media, Elam, Armenia, Parthia, Bactria, Babylonia, Assyria, Lydia, Egypt, "Ionians who live by the sea and those who live beyond the sea", Arabia, Thrace, Libyans, Nubians.] 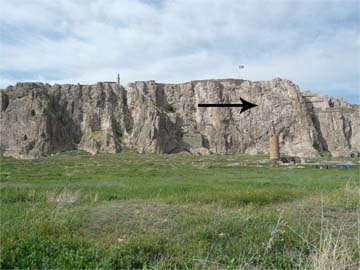 The citadel rock at Van, Turkey; the arrow shows the location of the inscription. 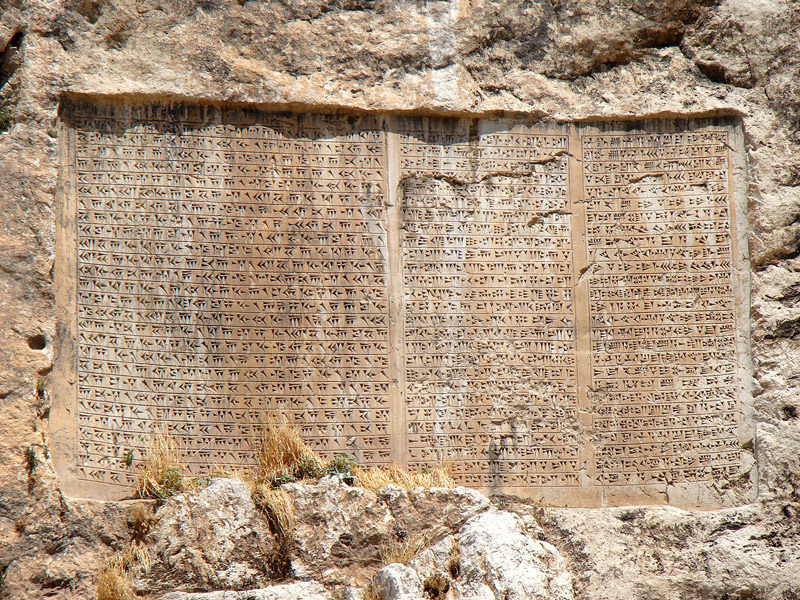 And this one, 20m up on the rocky citadel of Van, now in Eastern Turkey, shows that Xerxes saw himself as continuing his father's work:

… King Darius,my father, made much that is good, and this niche he ordered to be cut: as he did not have an inscription written, then I ordered this inscription be written. Me may Ahura Mazda protect, together with the gods, and my kingdom and what I have done.

The Greeks: creating "the barbarian"

Soon after they forced the Persians to abandon Greece, the Greek myth-making began. Aeschylus' play The Persians, whose description of the battle of Salamis we've already seen, started the myth which is powerful to this day. The drama reminds the Athenians of their heroic victory at Salamis. It's set in the royal palace at Susa, where the Persian nobles are waiting for news of Xerxes' mighty expedition against Greece. The Queen mother Atossa asks what's so special about the Athenians: 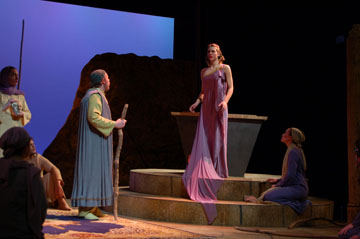 Atossa and Leader from a recent production of The Persians

What monarch reigns, whose power commands their ranks?

Slaves to no master, they call no man king.

The Greek mind (and the Greek language) liked the idea of pairs of opposites:

And, now that they'd shown themselves so superior to the Persians, there was a new one:

A barbarian was the opposite of a Greek - a negative to his positive. Greeks were starting to define themselves by being "not barbarians".

And it wasn't just Aeschylus' play that helped the myth grow. 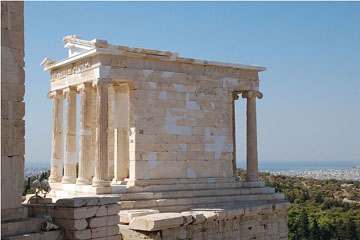 Temple of Athena Nike (Victory) on the Acropolis, Athens

The Trojan War stories were now spun to look like the Persian War Part I - a previous defeat of Asia by Europe. Soon all Greeks accepted this version - Herodotus sees the war between Persia and Greece as a conflict of civilisations. A mural was painted by Athens' best artist showing the victory of Marathon next to the myths of Theseus and Heracles. A temple of victory (Nike) was built on the Acropolis at Athens - with sculptures showing the battle of Plataea. Where previously artists had shown their skill painting Greeks fighting mythical creatures who symbolised "the other", like Centaurs or Amazons or Cyclopes - from now on it was Persians. Also part of Pericles' building programme, the view from the Gateway to the Acropolis, the Propylaia, was designed by Mnesicles to frame the island of Salamis, scene of the iconic victory, for those exiting the sanctuary.

The barbarian had been invented - and could not be un-invented. 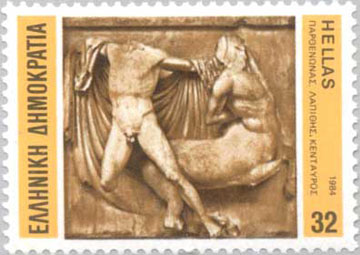 NEXT: XERXES, THE GREAT KING STILL

Post-war propaganda: Xerxes may have told the Persians it had been a victory. The Greeks began to believe that winning a battle proved their superiority in every way over Asian "barbarians"

Chrysostom means "golden gob" - a nickname he got for being a very persuasive public speaker. Surviving works included a speech "In Praise of Hair", and one where he "proved" that the Greeks lost the Trojan War. He came from a rich Greek family from Prusa, now Bursa in Turkey, near Istanbul. But he's writing 500 years later: should we take him seriously?

I was in the audience in 1971 at a modern Greek production of The Persians in the theatre at Epidaurus. The leader of the Greek junta, Georgios Papadopoulos, had been driven in a black limousine across the orchestra to a front seat shortly before the play began. There was applause and a huge cheer when these lines were spoken.

Logic was an invention of a later Greek - Aristotle. In logic there are no grey areas - everything must be black or white, yes or no, on or off (or in computer logic 0 or 1).

Some Greek states were ruled by kings or tyrants, who'd mostly supported the Persians in the war. Hippias, the Athenian tyrant expelled in 510 BC advised the Persians, and hoped that they would win at Marathon and restore him.

In the past Greeks had happily enslaved other Greeks, but by 480 BC most slaves would be non-Greeks - that is "barbaroi". If my slave is non-Greek, it's an easy step to assuming all barbaroi are slaves.

Greek unity was unknown before the war with Xerxes (remember the Spartan non-assistance at Marathon) - but the Persian threat created a partial and temporary unity.

It didn't last long after the war with Persia was over: Athens and Sparta fought a long and bitter war from 431 BC- 404 BC. You always need an enemy to promote unity: compare US and USSR and US and "global terror".

It had always been a basic principle of Greek life that one should help one's friends and harm one's enemies. You would lose respect for failing to harm an enemy when you got the chance just as much as for failing to help a friend. But your enemy was previously thought of as someone just like you (in Homer the Greeks and Trojans are the same as each other): now an enemy is someone alien, someone "other"; the opposite of you.