The Sasanians: Khusrau I - the philosopher king

Under Khusrau I, the Sasanian empire was at its most glorious. His achievements, apart from his military successes, include:

Cultivating the land was the duty of all good Zoroastrians, and Khusrau I did a lot to encourage it. There were extensive irrigation systems in Khuzistan and Iraq; canals and qanats were dug in many parts of the empire. Never before or since has so much land in Eranshahr been cultivated.

"We have never rejected anybody because of their different religion or background. We have not jealously kept them away from what we believe in. At the same time we have not been too proud to learn what they stand for. It is a fact that knowledge and study of the truth and of science is the highest accomplishment for a king. The most disgraceful thing for a king is to be too proud to learn and be ashamed of exploring the sciences. He who does not learn is not wise."

Khusrau I in his Kar Namag (Book of deeds) 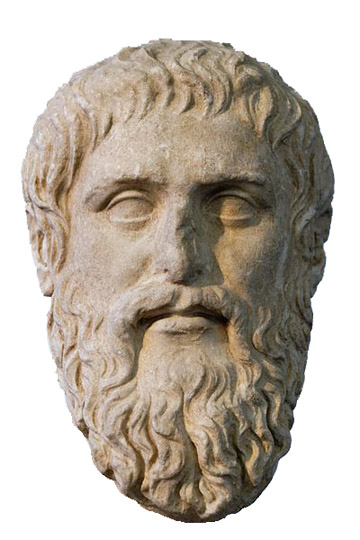 Apart from his early suppression of the Mazdakites, Khusrau was tolerant of other religious and philosophical ideas, certainly in comparison with his Byzantine opposite number, Justinian. In 529, Justinian closed the philosophical schools in Athens, presumably just because they were non-Christian. These schools included the Academy and the Lyceum founded by Plato and Aristotle in the 4th century BC: international centres of learning for a millennium. The redundant philosophical refugees were welcomed by Khusrau, and the works of Plato and Aristotle and other philosophers were carefully preserved. Greek philosophers and physicians became part of Khusrau's court circle, as did leading Christians.

Khusrau was also interested in Indian philosophy and science, and there was much cultural exchange between India and Persia.

Khusrau valued the ancient learning of Syriac and Assyrian (Aramaean) scholars. He established a medical university at Gondeshapur, the city founded by Shapur I in AD 271 for his Roman prisoners. Persian medicine combined the knowledge of the Greeks, Indians and the Aramaeans - the hospital at Gondeshapur was the first to have separate wards for different medical problems. There were other 'universities' in Babylon, Ctesiphon, Merv and Tabriz. It was through the Sasanian interest in philosophy and science, which continued under Islam, that the west was able to "rediscover" Greek learning in the Renaissance.

Khusrau's sayings and words of wisdom were collected and remained popular into Islamic times. Literature in Pahlavi flourished, and translations were made from Greek and Sanskrit works. The Avestan alphabet may have been developed under Khusrau I (but perhaps it was earlier).

It's recently been suggested that in the late Sasanian period, 'history' began to shift from oral to written. A collection of ancient tales fed into the Sasanians' imagined Kayanian ancestry, which then became the approved narrative under Khusrau I and his successors. This official version of history centred around Khusrau himself, and encouraged approved 'virtues' to be exemplified by his own court, rather than the courts of rival noble families, whose deeds continued to be remembered only by pre-literate minstrels. Thus Khusrau I's impressive economic and military reforms were accompanied by an attempt to revise Sasanian history, while downgrading the independent histories of the aristocracy, presenting a unified empire working together against enemies in to the West and to the East (Turan). The new history erased the Parthians completely.

The Taq-i Kisra in Ctesiphon, with the world's largest brick arch, was perhaps built or at least added to by Khusrau. 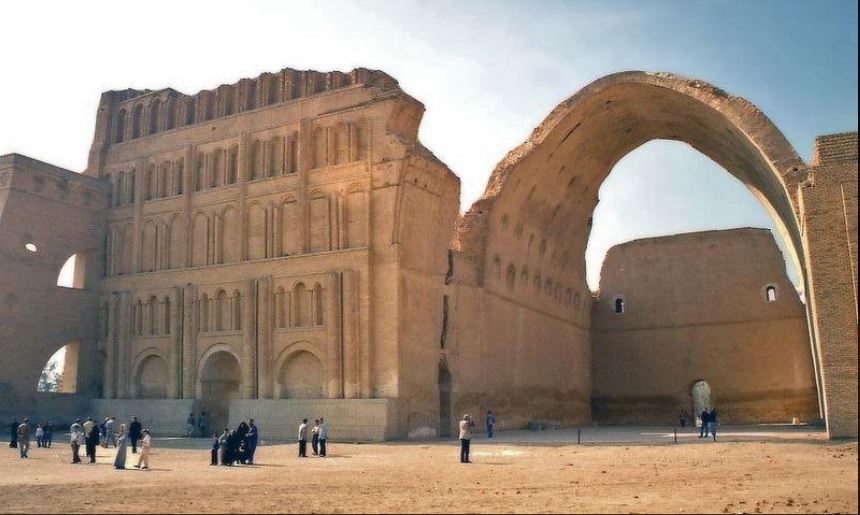 The Taq-i Kisra at Ctesiphon (Iraq). The arched area or Iwan became a feature of mosques in Iran and elsewhere - it's 28.4m high and 25.5m wide. This and other monumental buildings influenced architectural ideas in the west. Now even less survives, thanks to Daesh. Reconstruction here.

Trade agreements were made (or renewed) during Khusrau I's reign with China (Tang dynasty) and Byzantium, to consolidate the Silk Route, which was now seeing the passage of all kinds of goods between east and west, not just silk.

The reign of Khusrau was a time when working in silver and other metals flourished as never before. 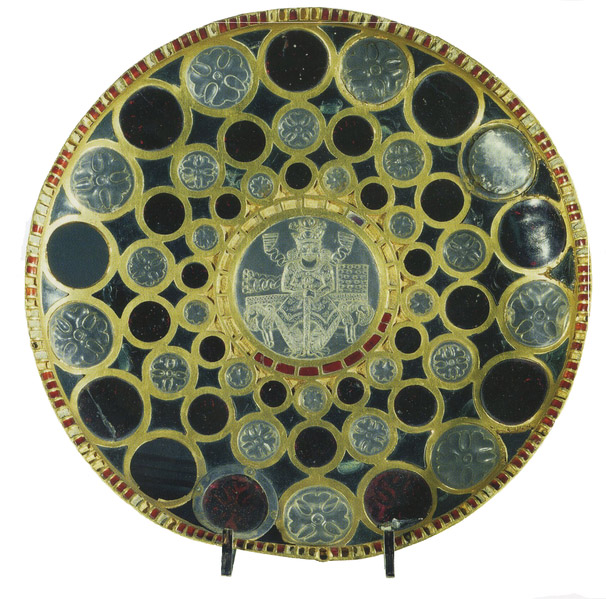 'The cup (or plate) of Khusrau'. Gold, rock crystal and garnet.

The glorious reign of Khusrau Anushirvan was long remembered by the Persians: many of his innovations remained in place after the Arab conquest.

Khusrau's son and the next king was controversial. Some sources say he was cruel, tyrannical, arrogant - and unpopular. Other Muslim and Christian sources have him down as a just and kindly ruler, who was popular with the ordinary people. We could interpret this to mean that, like several of his predecessors, he tried unsuccessfully to reduce the power of the nobles and Zoroastrian leaders, and was unpopular with them, while showing a tolerant side towards Christians and other minorities.

During most of his reign, there was inconclusive fighting with the Byzantines in Mesopotamia. While Tiberius was emperor, the general Maurice was quite successful, but when Maurice became emperor, his successor was useless: neither side could claim any sort of victory.

The Turks, dominant now in Central Asia, soon became the most formidable enemy the Sasanians ever had to face. They very soon crushed the Hephthalite Huns, who became their vassals. They were from a strong warrior tradition, and had the advantage of technology learned from their nearness to the Chinese empire. Chinese sources estimate the size of the Turkish army which invaded Sasanian lands in 588 as between 100,000 and 300,000 - the Persians were most definitely outnumbered.

The Sasanians, seriously outnumbered, thus faced serious problems in the east. It was bad luck for Hurmazd IV that a general from one of the oldest families in Iran (the Mehran family whose ancestry went back to the Arsacids in Parthian times) won a spectacular victory over the Turks in 589 and became wildly popular. His name was Bahram Chobin and Hurmazd soon found an excuse to sack him, after a minor setback in Armenia, where there was a new nomad threat. But Bahram Chobin would not be sacked - he proclaimed himself king and marched on Ctesiphon and, with the help of the nobles and priests, deposed the unpopular Hurmazd. The generals, however, wanted a Sasanian, and gave the kingship to Hurmazd's son Khusrau Parvez.

NEXT: TRIUMPH & DISASTER - THE RULE OF KHUSRAU II

Khusrau I: development of his empire.

He supports agriculture, trade, art and architecture - and, in contrast to the Byzantines, science and philosophy. Persian science and medicine continued to develop under Islam, and could eventually be "rediscovered" by Europeans in the time of the Renaissance (13th - 15th centuries).

Tolerant of other ideas...

But not in Zoroastrianism, where a strict orthodox line was enforced.

A Christian bishop in the Church of the East, Paulus, wrote an introduction to Logic especially for Khusrau, which has survived. 'Philosophy, which is the true knowledge of all things, lives in you.'

"The book of nobles/kings" was commisssioned by Khusrau I to collate the tales of the Iranian past. The book is lost, but its contents influenced later writers, most impotantly Firdowsi and his Shahnameh. The Iranian history, deriving from the collected tales of the Xwaday-namag can be examined here. Iranian National History.

The classical language of India - closely related to Persian, as well as to Greek and Latin. Khusrau I commissioned a translation of the Indian book of fables, the Panchatantra, whose stories show "how to be clever", and passed into the literature of the middle east and beyond.

His mother was a Turkish princess, whom Khusrau had married to consolidate their alliance.

Victory over the Turks

Bahram's exploits became exaggerated in the later stories in which he featured as a popular Persian hero. He had only a small force, which however included the formidable elephant archers. Supposedly he killed the Turkish king, conquered Balkh and crossed the Oxus.

He was in later centuries claimed as the ancestor of the Samanids - an Iranian dynasty that ruled in the area of Balkh from AD 875 - 999.

The first appearance of the Khazars in the Caucasus region. More here.

He was blinded, imprisoned and later killed.